Two years ago… we did a photo safari in Tanzania with our son and his wife. As we drove out of Arusha I noticed the highway had wide bike lanes on both sides of the road. I expressed my surprise to our driver/guide, Thomas, “So you have bike lanes in Tanzania!?!” He replied, “Ah yes, many Tanzanians can’t afford a car. Bicycles are a good way to get to town.” Sure enough, as we drove from village to village there were women riding with babies on their backs, young boys riding clunkers, older cyclists overloaded with bananas heading to market and even tourists on rented bikes. I thought to myself, if they can afford to build highways with bike lanes in Tanzania, surly we can build them in Ontario.

Last spring I was in Kalamazoo, Michigan cycling along suburban streets and county lanes. Every road I encountered had paved shoulders. The traffic was fairly heavy, but I felt comfortable riding on the metre wide paved shoulder. I was intrigued enough to get in touch with the Managing Director of the Road Commission of Kalamazoo County, Joanna Johnson, to ask why and how they do it. During our phone conversation, Joanna explained that the Road Commission has been paving shoulders for a number of years as a lane pavement preservation measure, as funding has allowed. The added benefit to the paved shoulders has been a more comfortable and safer area for cyclists to ride.

Joanna said that the county builds and maintains all roads in the county, approximately 1,267 miles, except for the state or inter-state highways and the roads within cities or villages. The 15 townships in Kalamazoo County collaborate on some road improvements; however these roads are maintained by the Road Commission. This centralized approach came about in the early 1950s as a cost saving measure and an early vision in consolidation, eliminating duplicate services. Maybe we in Ontario have been looking at this issue backwards — a few years ago Grey County downgraded roads to municipalities to save money — what if the county were to take over all the roads? This concept seems to be working in Michigan.

It isn’t that governments in Ontario have not been paving shoulders or adding bike lanes, but the process has been piecemeal and slow next to our neighbours in Michigan and other jurisdictions. 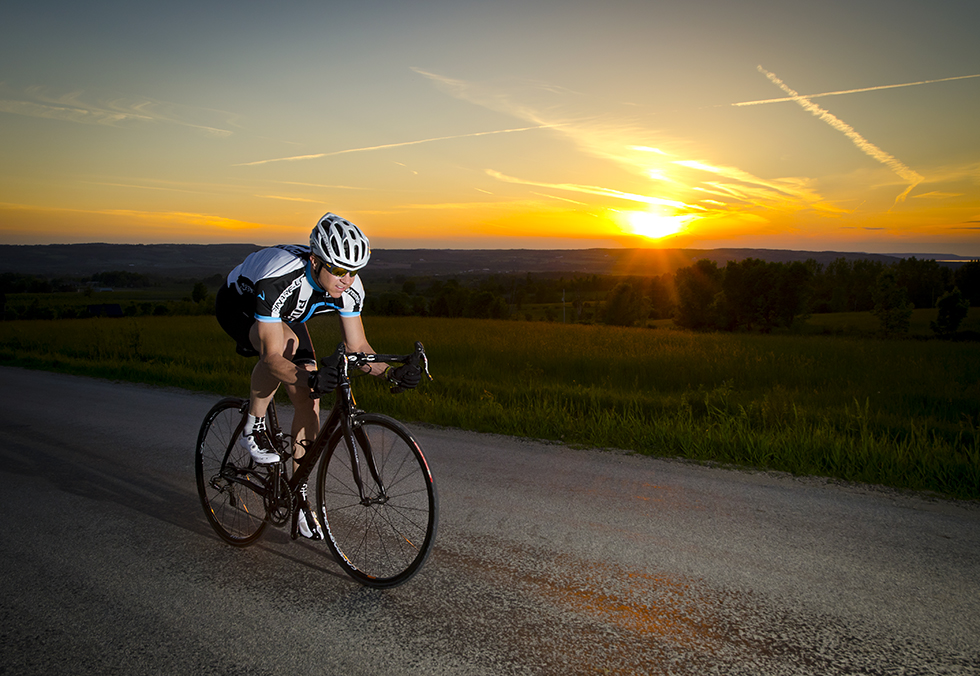 In 2013 the Ontario government came out with Book 18 – The Ontario Traffic Manual. Under the heading ‘Signed Bicycle Route with Paved Shoulder’ there is a chart showing the desired measurement of shoulder widths for rural bicycle routes as 1.5 to 2.0 metres (depending on traffic volume). I talked to a fellow riding a recumbent type trike on Grey Road 19. He said he cannot ride a standard bike any more because of an illness that affects his balance. There are only a few places where he can ride his trike because of the wheelbase of the unit. County Road 19 in one of them. He feels that it is time for both local governments and the province to get together and make more roads with paved shoulders of 1.5 metres or more like Grey Road 19. We live in a highly visible tourist area and it is vital to accommodate active tourism.

When Grey County announced that they were planning on re-building County Roads 31 and 119, my friend Bill Abbotts made a creditable presentation to Grey County Transportation promoting the idea of adding full bike lanes to those routes. At first there was a negative reaction to part of this proposal because of a deep ravine and an existing narrow roadbed on one of the roads. Since then Grey Road 31 has been re-paved with full bike lanes and Road 119 was completed in 2017 also with bike lanes. It looks like we are heading in the right direction. 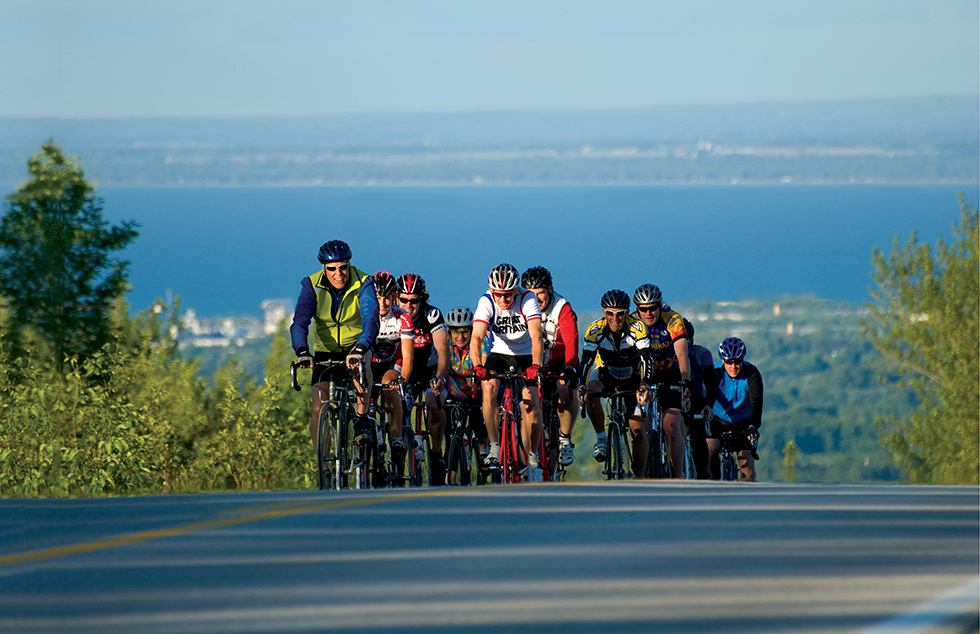 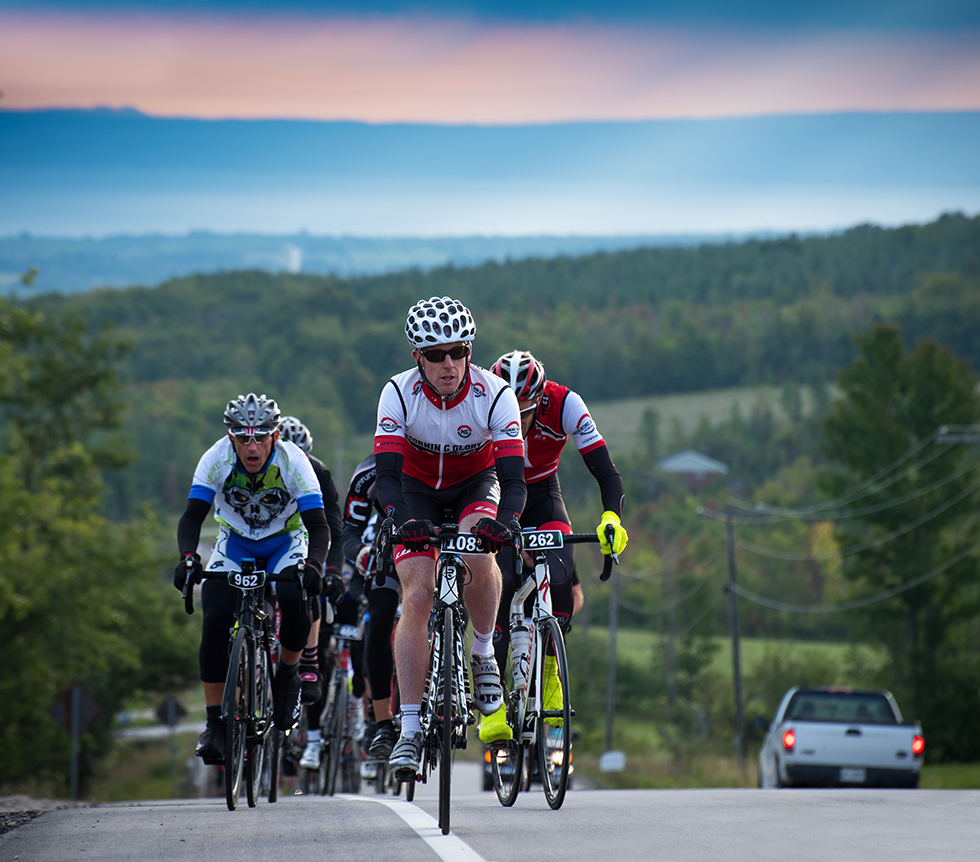 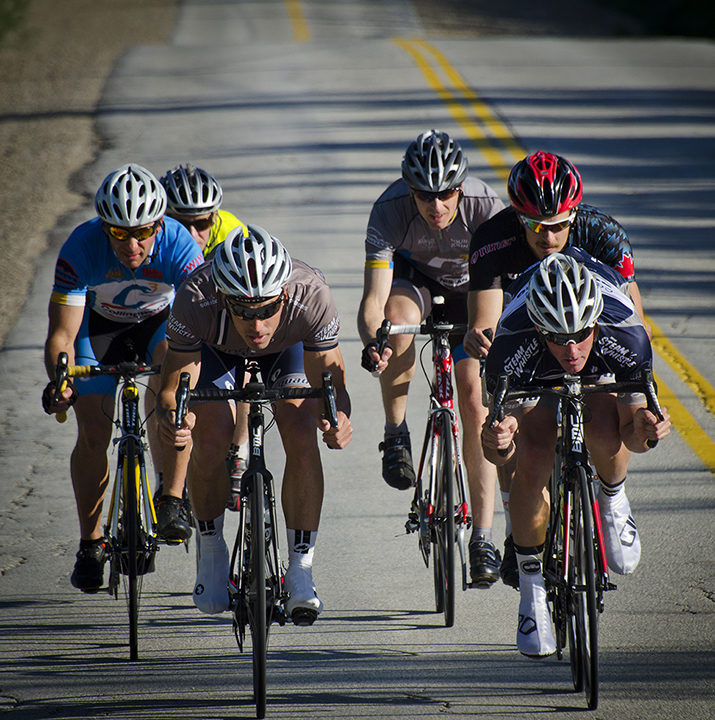 As some cycling activists have pointed out… Bike lanes make cyclists less visible to motorists and they (motorists) ignore bicycles on bike lanes. So as cyclists we must be more observant and more visible. Be aware and prepared for vehicles cutting you off when they make a right turn in front of you. Wear bright clothing and have lights both front and rear. Also, paved shoulders can have debris such as broken glass or loose gravel to look out for. As a cyclist you must always be alert and follow the rules of the road.

For years now I have been hearing reasons why we can’t pave shoulders from all levels of government. It appears that our local and county governments have come around to the idea of developing an active transportation plan that includes bike lanes. The Ministry of Transportation is another story. The re-paving of Highway 26 in the The Blue Mountains did not include one metre paved shoulders, even though there is not a good paved alternative. When I asked an MTO representative, “What are the Ministry’s future plans for adding paved shoulders in the Georgian Bay region?” I received an official policy statement from their head office stating among other things, “The ministry is working toward identifying a province-wide network and provincial barriers to local cycling networks as a way to improve cycling infrastructure in Ontario.”

I’m not sure what this means exactly, but in our area it seems to mean status quo… Continue making highways without paved shoulders.

To me the argument is not just about safer areas for cyclists to ride, but the wider paved shoulders increase the life of roads and are also safer for motor vehicles too. When proposing a road project our planners, engineers and politicians need to make intelligent, informed decisions on how wide those roadways need to be. 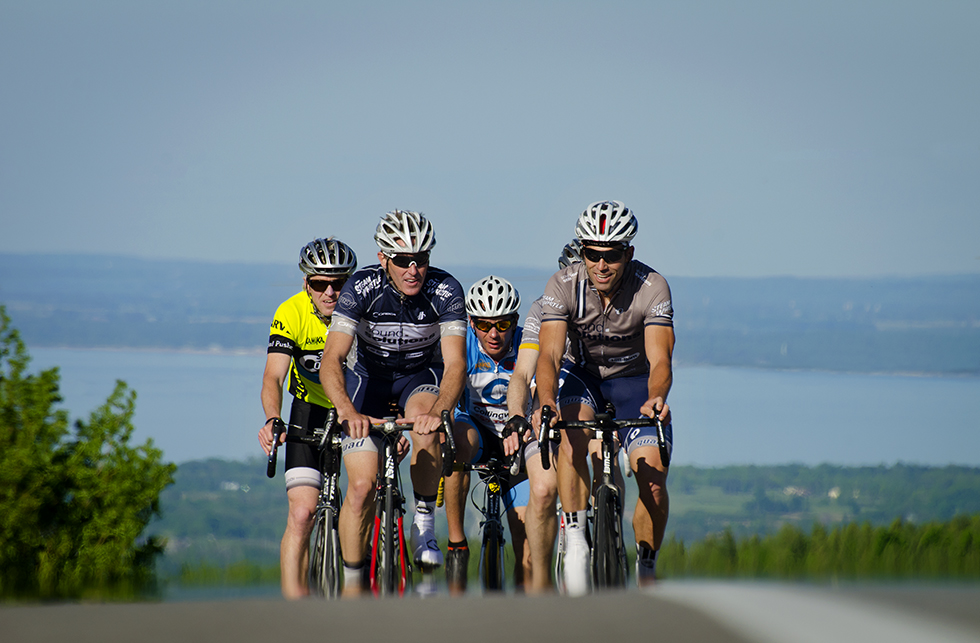 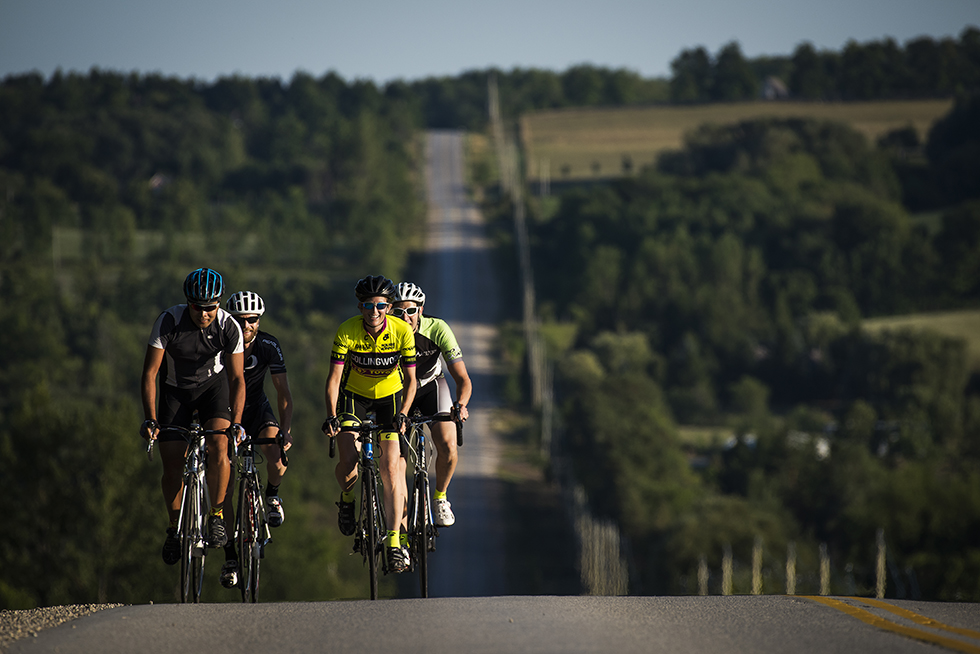 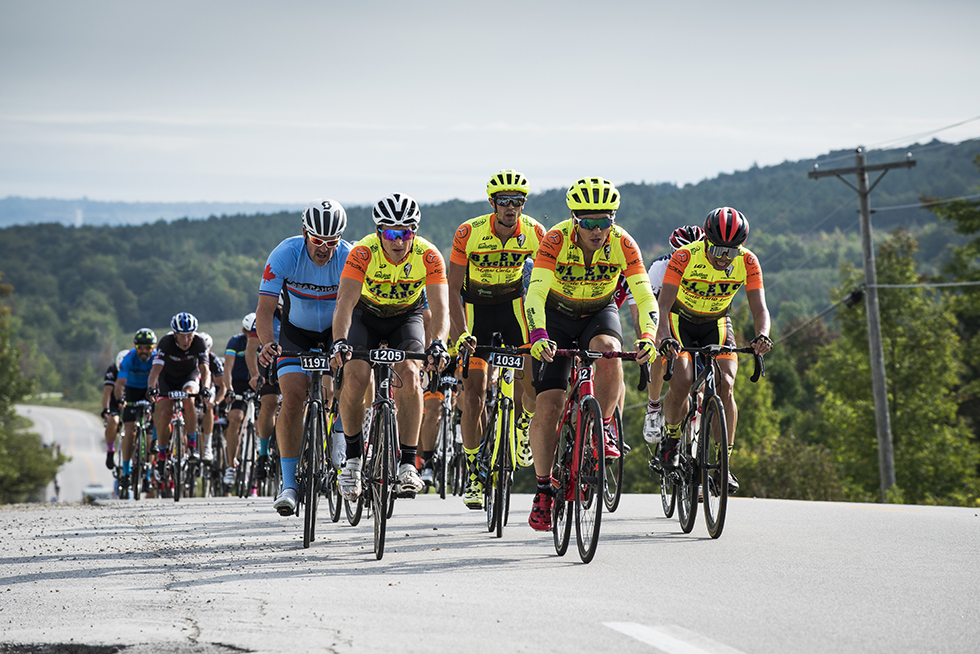 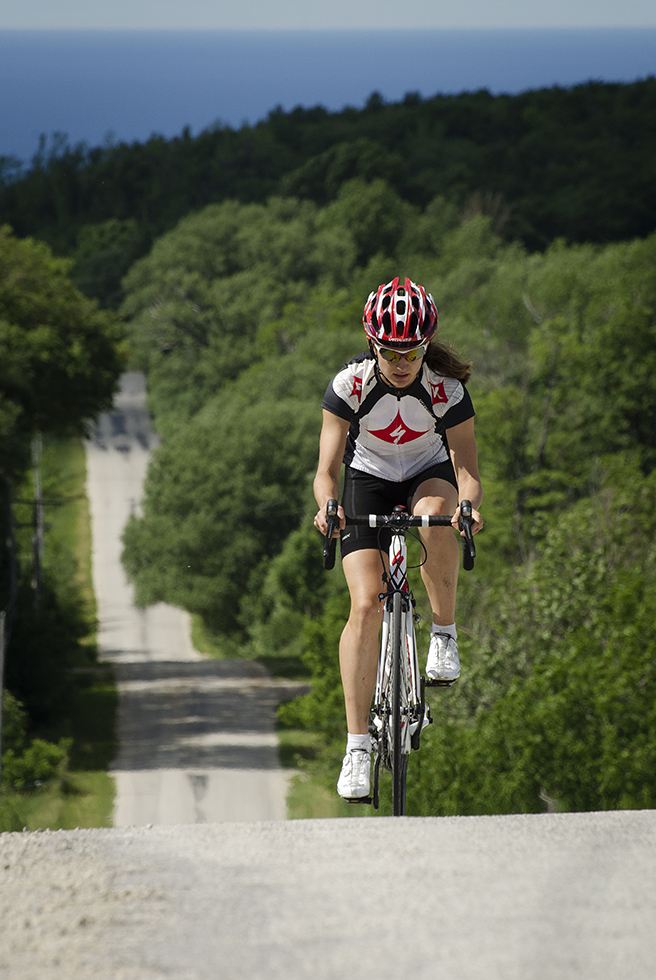 The benefits of shoulders in three important areas: safety, capacity and maintenance. Most of these benefits apply to both shoulders on rural highways and to marked, on-street bike lanes on urban roadways.

SAFETY – highways with paved shoulders have lower accident rates, as paved shoulders:
• Provide space to make evasive maneuvers
• Accommodate driver error
• Add a recovery area to regain control of a vehicle, as well as lateral clearance to roadside objects such as guardrail, signs and poles (highways require a “clear zone,” and paved shoulders give the best recoverable surface)
• Provide space for disabled vehicles to stop or drive slowly
• Provide increased sight distance for through vehicles and for vehicles entering the roadway (rural: in cut sections or brushy areas; urban: in areas with many sight obstructions)
• Contribute to driving ease and reduced driver strain
• Reduce passing conflicts between motor vehicles and bicyclists and pedestrians
• Make the crossing pedestrian more visible to motorists
• Provide for storm water discharge farther from the travel lanes, reducing hydroplaning, splash and spray to following vehicles, pedestrians and bicyclists.