With four-season recreation and close proximity to the Escarpment and Georgian Bay, the town of Collingwood has seen steady growth; in 2016 Collingwood was named the top community in Canada in which to start and grow a business by the Canadian Federation of Independent Business; in 2017 the municipality ranked 24th on the list of fastest-growing municipalities located outside a census metropolitan area. These are just a few accolades in a long line of lists that have recognized Collingwood as one of the country’s best places to live, work and play.

Having Blue Mountain Resort just down the road certainly adds to the appeal, as do the restaurants, shops, golf courses and access to world-class fresh water beaches. Let’s take it one step further: studies show that municipalities with high walkability scores promote happiness and sense of community—perhaps it’s not a coincidence then, that Collingwood’s multi-use trails system encompasses over 60 kilometres of recreational trails. 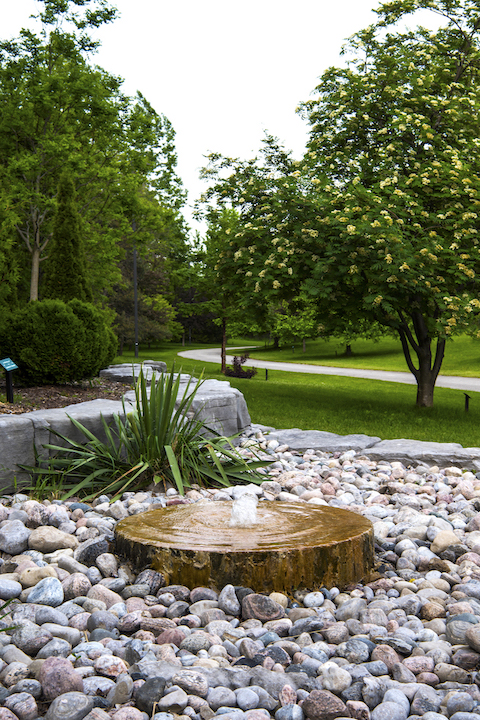 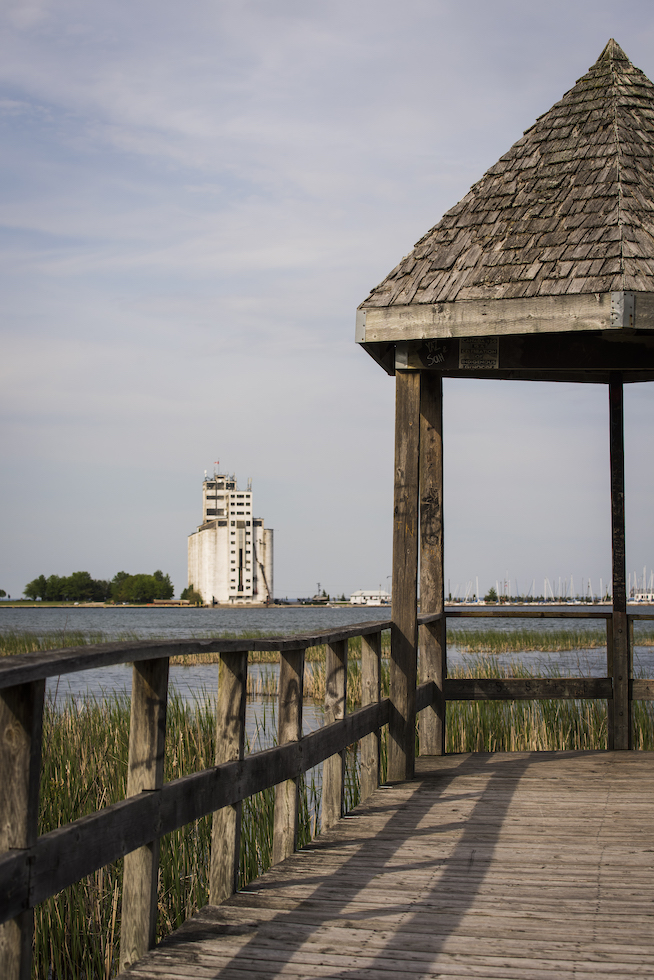 “If you look at the advertising for just about every new residential development in town you will find ‘Good connection to the trails network’ somewhere in the brochure,” explains Trails Advisory Committee Co-Chair, Murray Knowles. “The network is clearly an attraction for people looking for the South Georgian Bay lifestyle.”

Trails Advisory Committee was established when George Christie, who is affectionally known as “Mr. Trails”, moved to Collingwood and became interested in creating a trail network so he could ride his snowmobile in and out of town. In 1991 he joined the volunteer Parks and Recreation Advisory Committee and, along with then-Councillor Sonny Foley and then-Parks and Recreation Director Peter Dunbar, advocated for the establishment of the Trails Advisory Committee. With an active volunteer committee at the helm, the network continued to grow and in 2001 the first edition of the Collingwood Trails Map was printed.

Today there’s a picturesque path leading to every major point of interest in town, including the scenic lookout at Millennium Park, serene gardens of the Arboretum, tranquil Labyrinth, unspoiled beaches of Sunset Point, various sports fields, historic Station Museum and of course, Downtown.

For those of us traveling from the west, there is direct access to the Georgian Trail, a 32 km linear gravel trail along the route of the former Northern Railway, that links Meaford, Thornbury and Craigleith to Collingwood. Once in Collingwood the trail system encompasses well-marked paths covered with crushed stone, concrete, wooden board- walks as well as paved sections. Most surfaced trails are flat terrain and generally accessible for the physically challenged. Trail Maps are available at no charge (or a nominal donation) at over 100 locations around town. 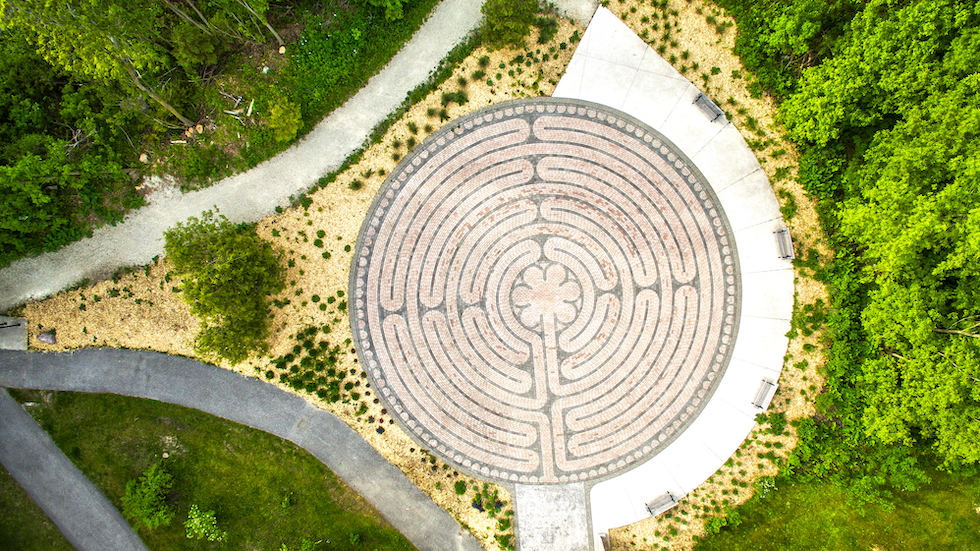 In 2004 an anonymous donor pledged significant funds to the network, which was matched by the Town, resulting in the creation of the Hen & Chickens boardwalk. In recognition of this huge contribution a 19 km trail route circling the Town was built, named the Heather Pathway. The same enterprising donor has continued to assist with the funding of specific trail-related projects and has recently been involved in the rebuild of sections of the Harbourview Park boardwalk.

In 2009, in an effort to enhance the overall trails experience, the Trails Committee started the “Features on the Trails” initiative to highlight the town’s historical and natural heritage. There are now 32 interpretive signs along the trail network which recount the rich and colourful history of Collingwood.

The Collingwood Labyrinth (on the Harbourview Trail) was erected in 2015 on land donated by the Town. The cost to build the Labyrinth was $165,000; all donated by generous citizens and visitors of the Town. A popular place to rest and reflect, the accompanying interpretive sign explains the purpose of labyrinths and how to enjoy the full meditative experience.

“As we move forward, there continue to be many opportunities and challenges for the trails network to grow,” explains Murray Knowles, who is also a Director of the Georgian Cycle and Ski Trail Association. “Although the current network encompasses almost all of the developed area within the town, new major developments continue to emerge requiring ongoing expansion of the network. Another requirement is to better integrate the trails with the road network. The town will shortly unveil its Cycling Plan and the integration of the trails into a full municipal active transportation network will become the next major thrust. The final challenge is being created by Mother Nature. Steadily increasing water levels in Georgian Bay have unfortunately submerged a trio of our most scenic trails along the waterfront. Much work is required to raise these trails so that they are immune to the fluctuations in the lake levels.” 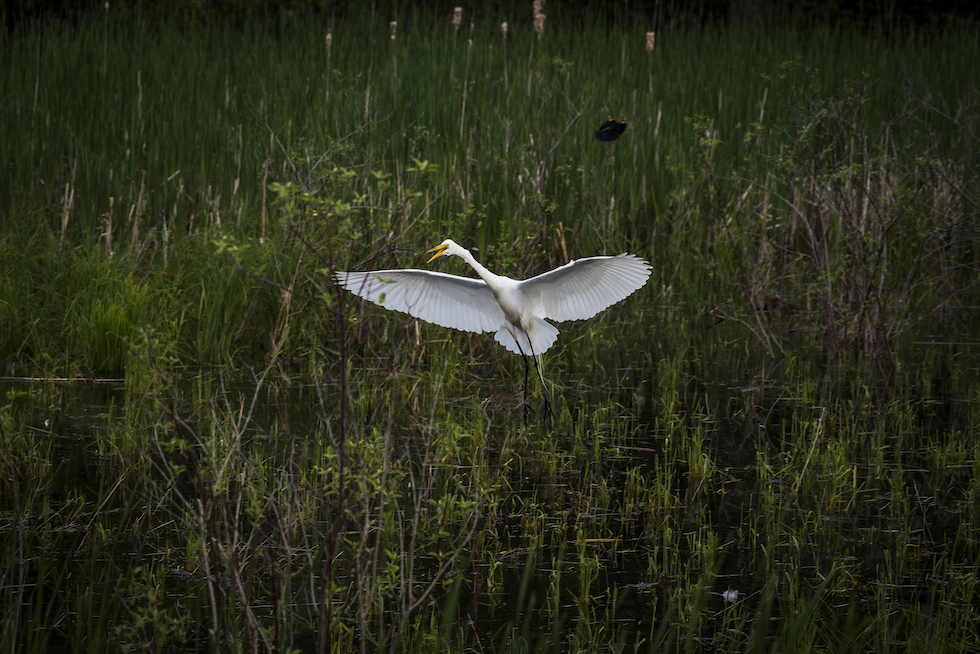 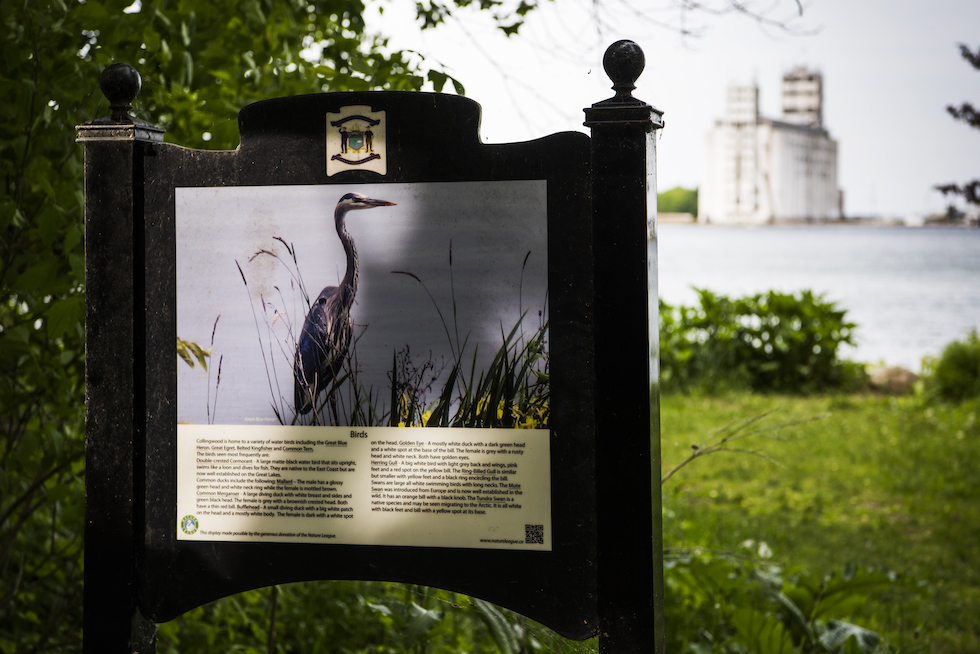 1. Harbour Circle Route – 4.2 km (1+ hour walk)
A serene route in the centre of town, the Harbour Circle brings you along the waterfront, the boardwalk, and past the Arboretum, and the labyrinth. For an extra bonus, follow the trails to the top of the berm and enjoy a per- fect view of the town, the Collingwood Terminals, and the ski hills at Blue Mountain.

3. West Circle Route – 7.7 km (2 hour walk)
A pleasant walk in the west end of town, the West Circle follows the Georgian Trail and the Black Ash Creek. Drop into one of the resorts along the route for a beverage to enhance your trip.

4. Heather Pathway – 20+ km (4.5 hour walk)
Looking for a challenge? Follow the Heather Pathway around the entire town and experience all the sites that the town has to offer.

Want to rough it a little? Hike or bike these nature trails and expe- rience the wilderness without leaving town. And, remember, they are fantastic places to snowshoe or X-country ski in winter. |E| 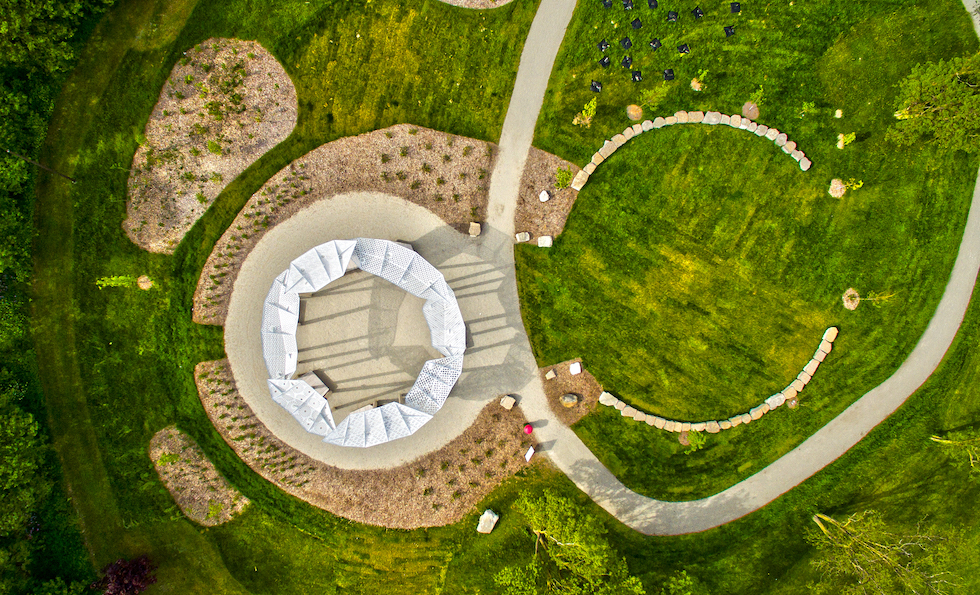 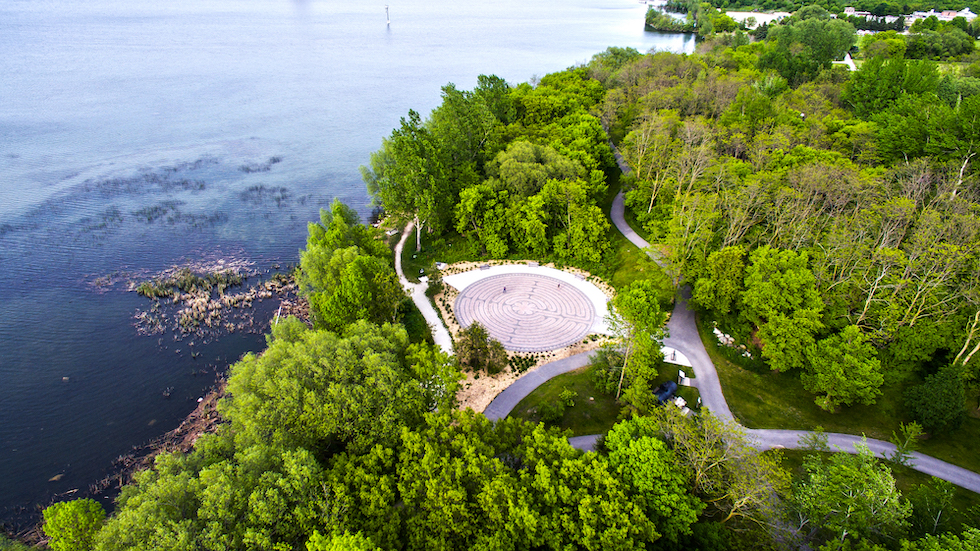 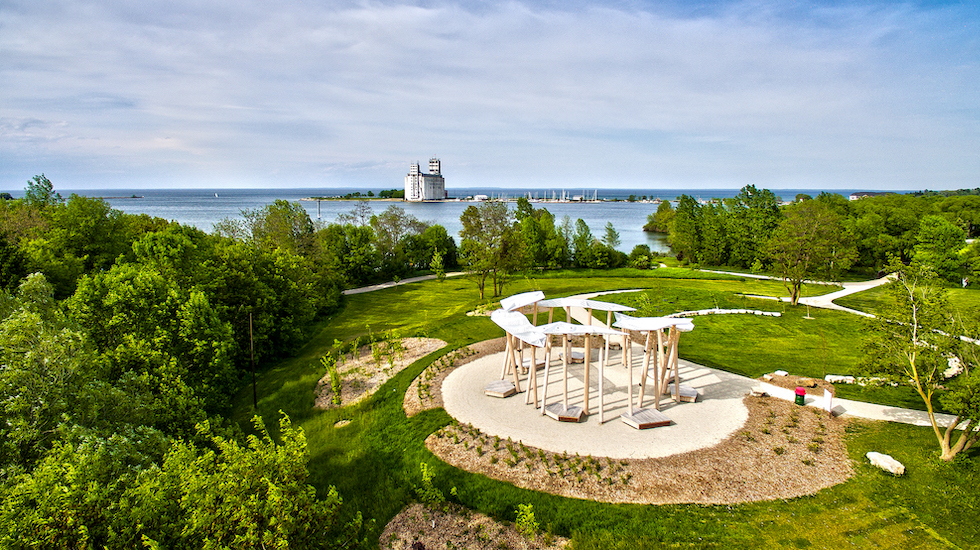 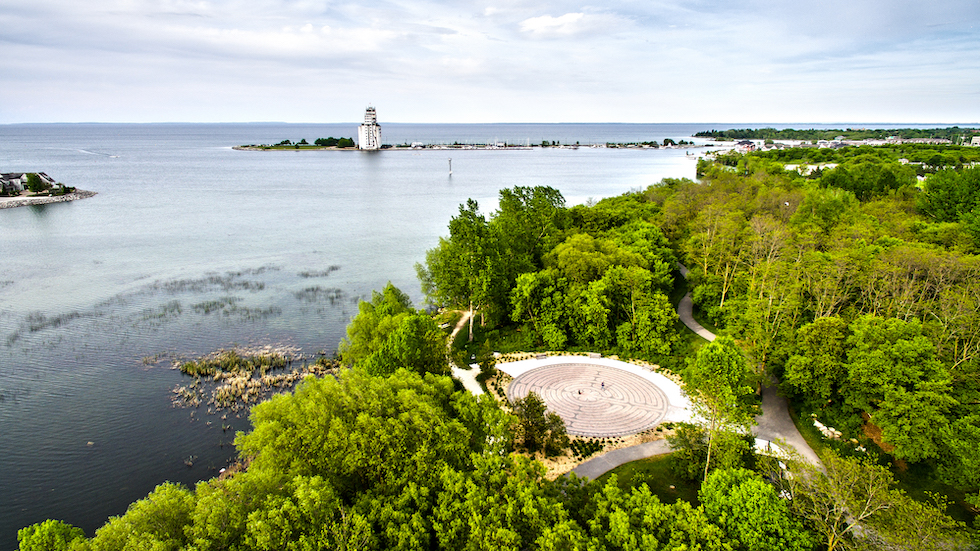 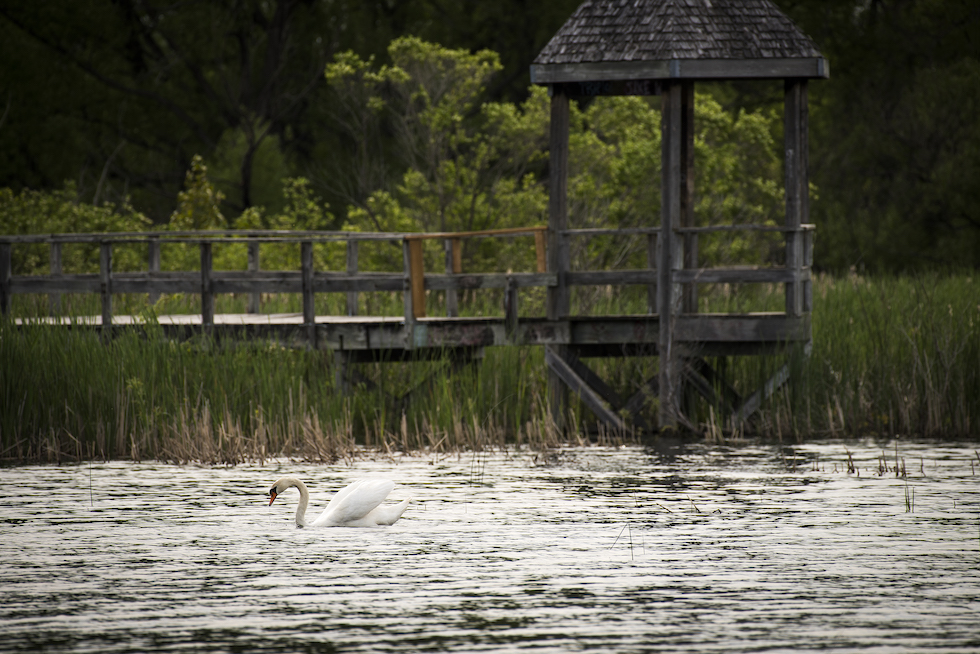