One of my earliest memories of summer on Georgian Bay is day tripping to the eerie Mary Ward shipwreck. My family would pile into our tin boat and head out in search of the remains of the Great Lakes steamship—our parents telling us stories along the way of early Craigleith settlers hearing the ship’s whistle and seeing her lights after she ran aground on Milligan’s Reef (as it was known before being renamed Mary Ward Shoal).

Completely entranced by the tale, I would gaze over the gunwales into the frighteningly dark Georgian Bay waters as they abruptly became jarringly clear—my eyes growing wide as the planks of the ship’s hull, propeller and boiler came into view. The 129ft. wooden steamer is said to have veered off course on its way from Owen Sound to Collingwood and became irreversibly marooned on the smooth rock ledge of the shoal. The dramatic story, filled with mystery, intrigue, heroism and human error resulted in a nautical disaster that left eight people (and one dog) dead, and entombed the Mary Ward in a shallow water grave approximately two miles from the Nottawasaga Lighthouse near Craigleith.

I recently returned to the Mary Ward and was reacquainted with the legend of the ill-fated vessel whose remains endure nearly a century and a half after she was pounded to bits by a Great Lakes gale. 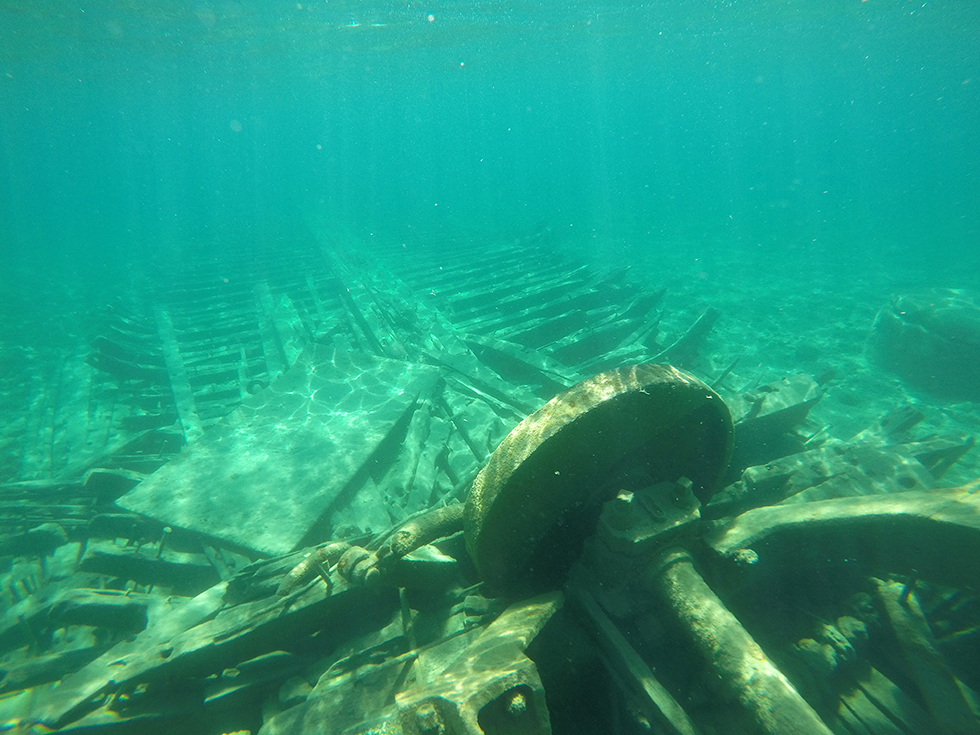 The wooden planks of the hull lie like splayed ribs on the smooth floor of the shale, fully intact thanks to Georgian Bay’s freshwater. Further to the west lies the propeller, while part of the ship’s stack and boiler rest to the east, towards the now inactive lighthouse. Snorkelling through the turquoise waters around the wreckage reignited my childhood imagination, and I was inspired to uncover the series of events that led to the loss of life, and the Mary Ward’s demise that fateful night in November 1872. 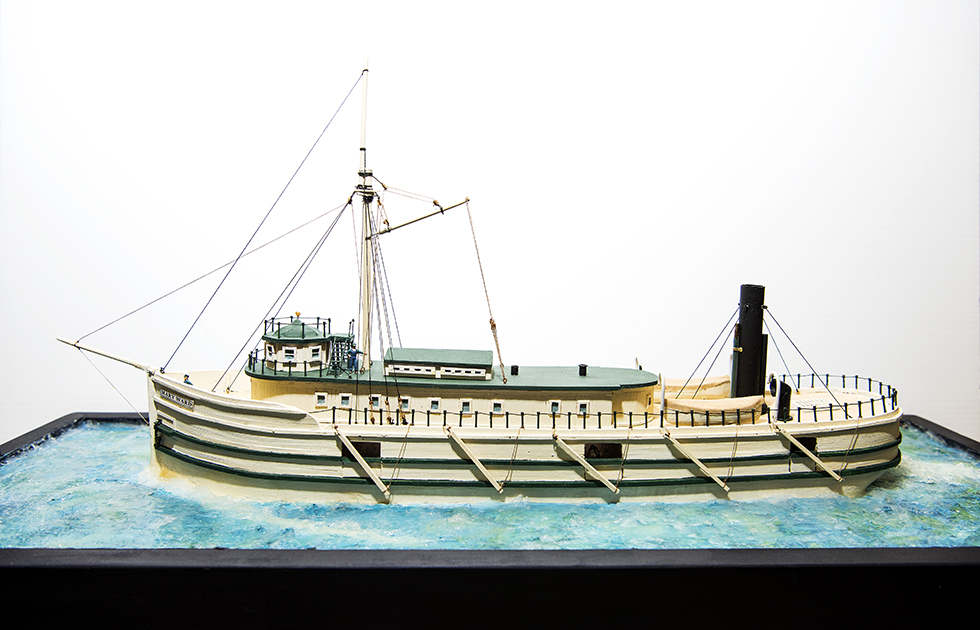 On Sunday, November 24, 1872, the gale had passed and Mary Ward set sail for Owen Sound under the control of Captain William Johnson. The weather was unseasonably warm and the water abnormally calm. By 7 p.m., after picking up additional passengers, Mary Ward left Owen Sound, bound for Collingwood. What happened next has been the cause of speculation. Some suggest the Captain may have mistaken the lights of Craigleith for the Collingwood harbour entrance and veered off course towards Milligan’s Reef. Some suggest that the Captain simply didn’t know the waters well. Others have suggested that there was a bank of fog caused by warm air passing over the cooler Georgian Bay waters. Some imply the Captain may have been drinking. In the library reference ma- terial, one source went so far as to claim that crews of both seafaring and Great Lakes vessels often spent their voyages inebriated—no official statement could be found to confirm this, but it has been suggested that the passage was joyful—the voyage filled with singing and merriment from both passengers and crew. In any event the ship was well off course, heading east at full speed when she hit Milligan’s Reef and became grounded on the rocks at around 9 p.m. only a few kilometres from the Nottawasaga lighthouse which could be seen for twenty-five miles in clear weather. 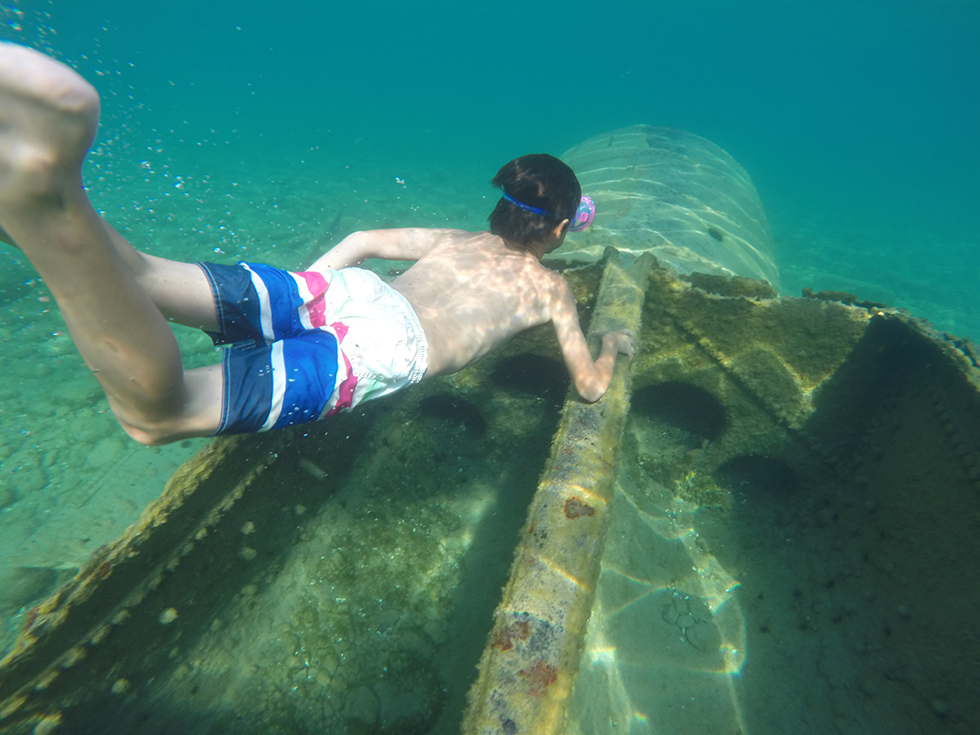 Fortuitously the ship wasn’t taking on water and the hull was intact. At approximately 10 p.m., Frank Moberly met with Captain Johnson and explained that his brother George, newly elected Mayor of Collingwood, owned a tug called the Mary Ann which could dislodge the Mary Ward. He offered to row to shore, fetch the tug, and return early the next morning. George Corbett, who was part owner of the Mary Ward, agreed to go along to make any financial arrangements for the rescue. A lifeboat was launched that clear, calm night and the men reached Craigleith within an hour. Believing they were not in immediate danger, the remaining passengers and crew decided to stay on board and wait for help to arrive at first light.

An enquiry after the incident found that the Mary Ward had no barometer. If they had, Captain Johnson would certainly have been warned of the oncoming gale and dispatched the remaining lifeboats, safely transporting the remaining passengers ashore. Instead, the passengers and crew reportedly enjoyed a few more libations, dancing and singing into the night. One survivor recounts, “I can remember standing out on the stern after she had struck, looking up at the stars and feeling on my face the gentle warm south-west breeze that was blowing. I could hear them singing in the cabin. I had done considerable sailing on the Great Lakes but only as a passenger and businessman and was aware of how treacherous these lakes could be especially so late in the season.” –eyewitness account, according to Robert W. Thom.

A little after midnight the wind shifted to north-westerly and while most passengers and crew had retired for the night, those still awake began to sense they were in danger. The ship’s watch- man woke Captain Johnson who immediately called all-hands-on-deck and sounded the ship’s whistle.Meanwhile on the shore, Moberly and Corbett had hoped to obtain a horse to ride to Collingwood but were unable to find anyone still awake in the little village of Craigleith. They set out on foot, reaching Collingwood by approxi- mately 7 a.m. To their dismay they discovered that the tug Mary Ann had already been laid up for the winter and could not be made ready for a rescue attempt for several hours.

Dawn had arrived on Milligan’s Reef and according to the passenger quoted by Robert W. Thom, “The breakers were sweeping across the stern and in a few hours, we were all hanging on to whatever gave us shelter. Most of us had be- come reconciled to our fate.” The storm increased in fury and the waves were enveloping the Mary Ward’s upper decks and wheelhouse. Sensing he could no longer wait for Moberly and Corbett to facilitate the rescue, Captain Johnson and seven other men attempted to row one of the remaining lifeboats to safety but only got as far as Nottawasaga Island. The small boat had difficulty reaching shore, nearly breaking apart upon the attempt. 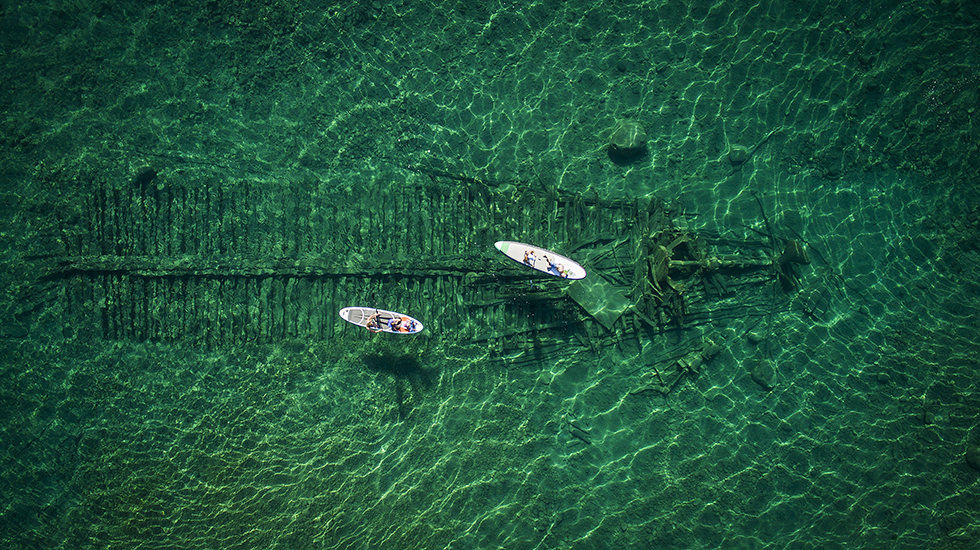 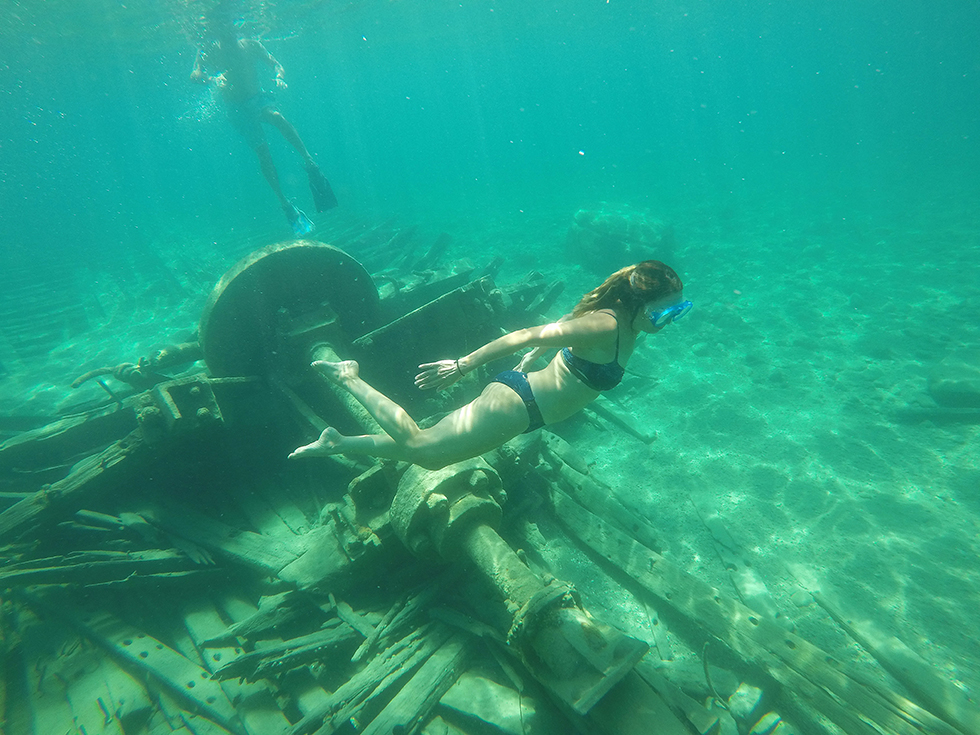 Later that morning, George Moberly had Mary Ann back in the water and set out from Collingwood in an attempt to reach the Mary Ward. Mary Ann was unable to make headway in the teeth of the storm so she turned back. Realizing that no help would be able to come from Collingwood, Moberly and Corbett decided to head west to Thornbury to get the help of some local fishermen.

As the storm grew, so did the fears of the men who remained aboard the Mary Ward. The ship was taking a pounding, but it held together. In another bold attempt to seek help, the third and last lifeboat was prepared around 3 pm. Monday for a last-ditch effort to reach shore before dark. As panic increased, eight men boarded the boat. Among them was Charles Campbell, a res- ident of Craigleith, whose wife was reportedly in active labour during the time the Mary Ward had been grounded. Campbell was desperate to get to his family, just a couple of miles away across the churning water. An excellent swim- mer, Campbell, perhaps, liked his chances of making it to shore if the lifeboat failed. Regrettably the boat only made it a few yards before a huge wave toppled the boat and its passengers. Clinging to whatever they could manage to hold onto, they desperately tried to survive but they eventually succumbed to the frigid water and sunk below the surface. Charles Campbell was last seen clinging to the top of the boat as it drifted eastward toward Nottawasaga Island. But he, too, succumbed, and his body drifted to shore a few weeks later at Wasaga Beach. All eight men drowned.

Back on land, Moberly was aware that a new rail line, an extension of the Northern Railway of Canada, had opened for service between Collingwood and Meaford a year before, following the survey by Frank’s brother, Clarence Moberly. Frank boarded the train to Thornbury where they hoped to round up some of the fishing vessels in the Thornbury fleet. Moberly contacted his friend, Captain W. Alex Clark and soon had amassed 15 local fishermen willing to help with the rescue effort. They set out into the storm aboard three fishing boats. The winds were still howling and the waves topping four feet. With their sails tightly-reefed, they turned eastward toward Craigleith. They approached Milligan’s Reef from the leeward side and were able to tie up against the Mary Ward. Several of the fishermen clambered onto the Mary Ward and helped the 19 people still aboard to the safety of the fishing boats. The only further casualty was the ship’s mascot, a dog, after it fell into the water. “It was last seen on the crest of a breaker, swimming for shore,” the passenger in Robert W. Thom’s account reported. “Captain Clark said he did not think it reached the land.”

While the storm was beginning to die down, it was deemed safer to con- tinue downwind, so the little rescue fleet went on to Collingwood where the rescued men were finally on solid ground again. 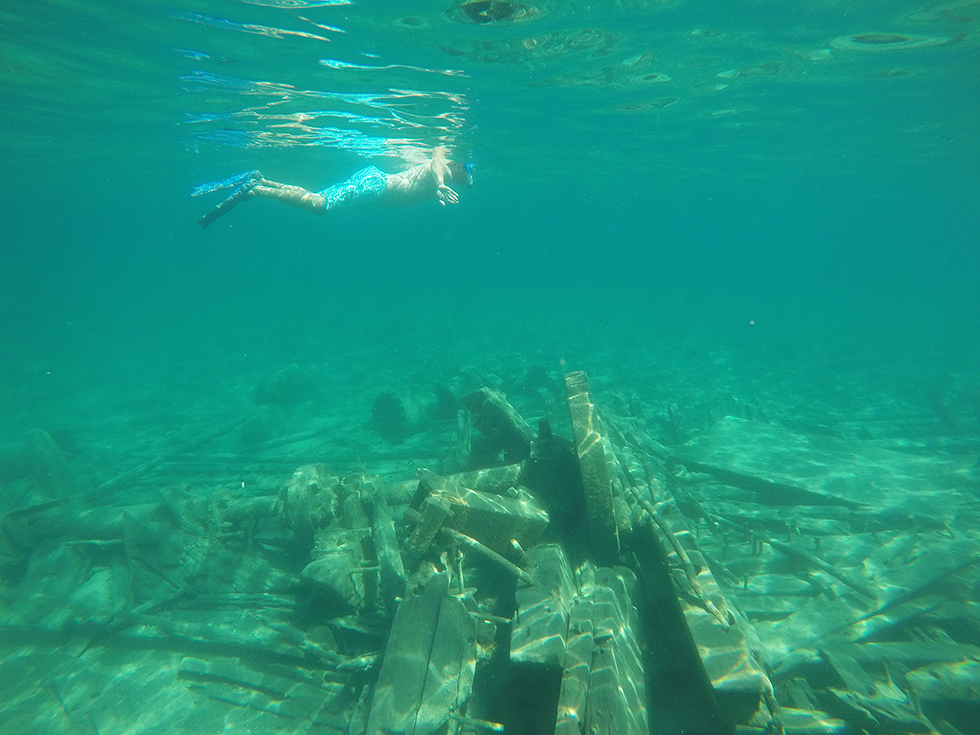 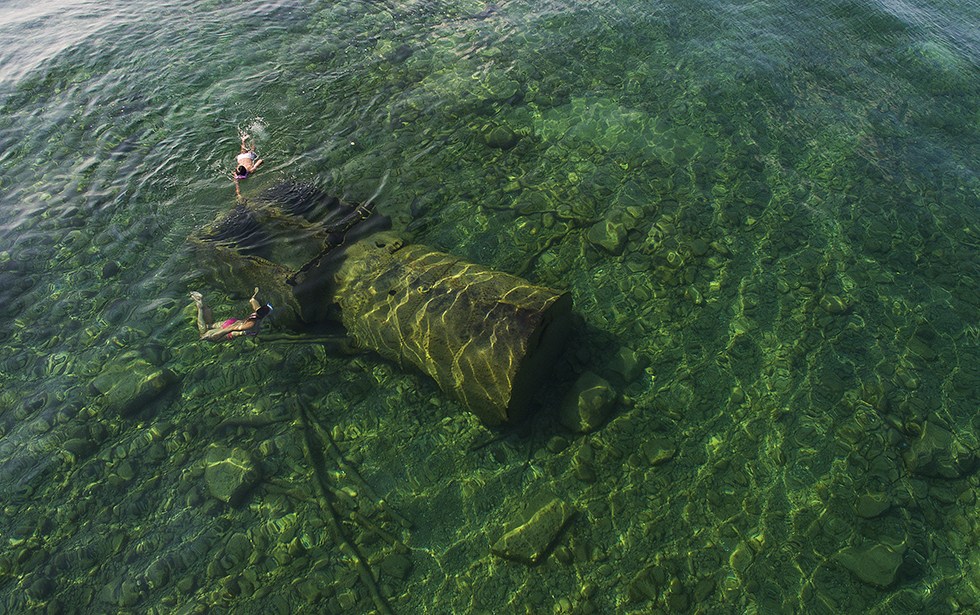 Meanwhile, the Mary Ward, which had held out until the last of the passengers and crew were rescued, was beginning to show the effects of her ordeal. As she broke up barrels of kerosene floated to the surface. “There was lots of kerosene around Craigleith for some time,” Thom wrote. By Christmas the Mary Ward had spilled most of her cargo. The salt barrels broke open, their contents dissolving into Georgian Bay. Barrels of oil and pieces of furniture drifted to the Craigleith shore, where local farmers salvaged their windfall.

In late January teams of men with horses walked over the frozen bay and salvaged what they could. One farmer apparently spent much of the winter pillaging whatever he deemed useful. By early spring most of the structure had vanished, either by looting or carried away by shifting winter ice pressure and waves. During the late spring and summer of 1873, a series of unsuccessful attempts were made by the wrecking company Colin & Beck Co. to pull the Mary Ward off the shoal. However, she had lost her bottom and it was ultimately decided to abandon her, evading further ex- pense in efforts to save and repair her. Mary Ward’s owners reportedly received $250 cash from the Royal Insurance Group.

Frank Moberly was honoured for his heroism and presented with a medal and citation but reportedly never mentioned it to his family, friends or acquaintances. The other rescuers, all from Thornbury, were recognized by the Minister of Marine and Fisheries and presented with a monetary award of $15 in recognition of their gallantry.

The Mary Ward disaster, historically recorded as a “navigational error” was variously attributed to a faulty compass, a suspected malfunctioning distance measuring device (a ship log), and confusion about the location of the Nottawasaga lighthouse. Today the Mary Ward shipwreck serves as a reminder of the volatility of the Great Lakes, yet the beauty of this watery grave is hard to resist on a crystal-clear bluebird summer day. Only the boilers, heavy planking, engine parts and a few metal fragments remain and sit several metres below the surface of the water. 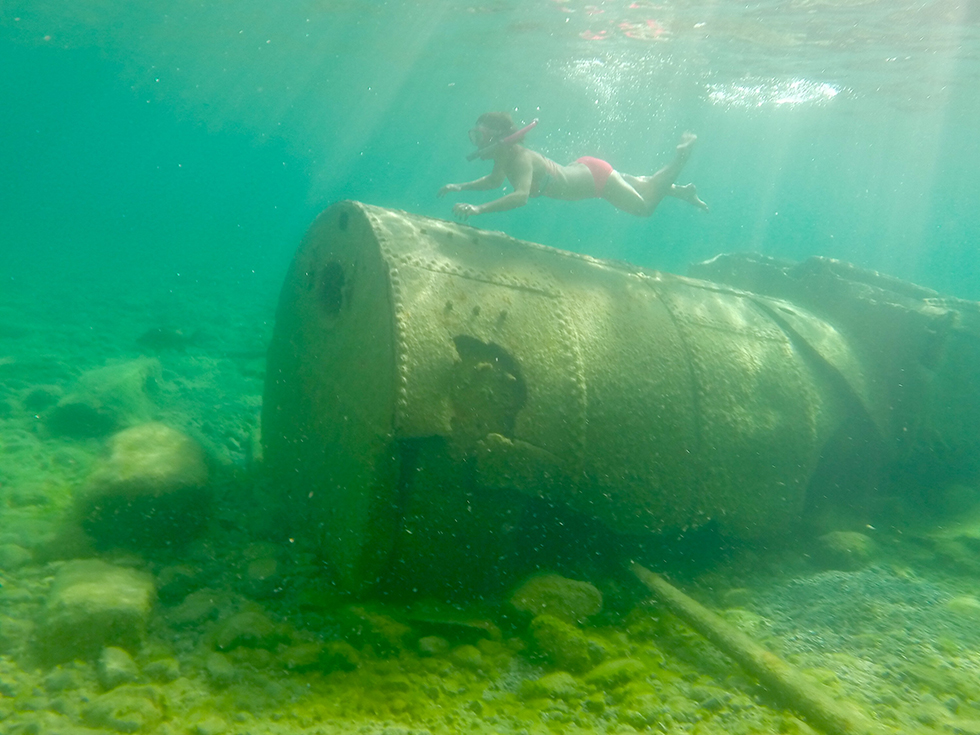 Collingwood Charters runs excursions from the Collingwood Harbour, past Nottawasaga Island to the Mary Ward Shoal. It is strongly suggested that you do not to attempt the trip on your own unless the weather is calm and you have had a large degree of experience in uncertain waters.