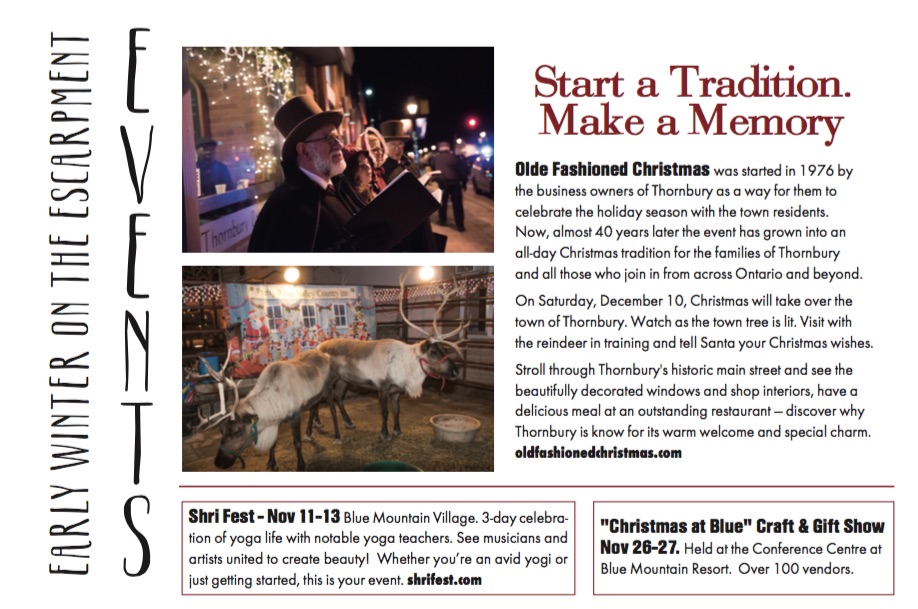 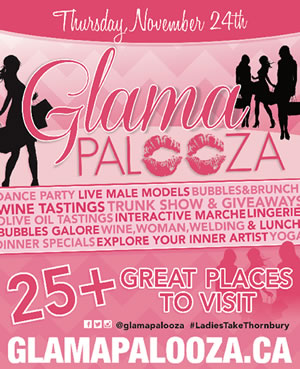 Five years ago, Casey Thomson, owner of the Cheese Gallery and Leslie Lewis, owner of Evolution Him & Her, were enjoying a complimentary dinner at Bridges Tavern, as part of a “Ladies Eat Free” promotion, the brainchild of previous Bridges owner Meredith Brown. “Each Wednesday in the month of November, Bridges would have a restaurant packed full of ladies,” explains Casey. “We thought, maybe Thornbury business owners could capitalize on this.” So, in its first year, 12 local businesses came on board and Glamapalooza was born. In 2015 there were 25 businesses participating, and over 1000 ladies enjoying a wide variety of events spread out over two days.

November can be a trying month for retailers and Glamapalooza helps to make it a little easier—in fact, some participating businesses report having their best day of the year on Glamapalooza. Thornbury business owners (who are 90% female) have enjoyed an economic boost, posting record sales and offering the ladies who travel from all over Ontario an entire day filled with pre-Christmas pampering and shopping, open houses, special events, live music, workshops and an all-around good time aimed at giving them a day off and a night on the town.

The small but mighty organizing committee consists of Casey and Leslie, as well as Samantha Pollock of Sparrow Blue and Nicole Paara, Realtor with Royal LePage Locations North. This group does everything from event logistics, sponsorships, advertising and more. Glamapalooza has teamed up with the Collingwood G&M Hospital for another year to raise money for their digital mammography unit: a tangible return on investment for women of The Blue Mountains & area.

This year, look forward to Clarksburg joining in the fun, with events at Ironworks, Loft Gallery & Code Red. Lingerie & Lunch, fashion shows and yoga are just a few of the activities you can expect; and Bubbles & Brunch on Friday will keep the party going into the weekend. Of course, no Glamapalooza would be complete without male underwear models dancing in the windows of Evolution Him & Her. The full list of events, activities and updated schedule of events is available at glamapalooza.ca. Dinner reservations are highly recommended.

Get updates emailed directly to your inbox by joining the Glamapalooza mailing list at glamapalooza.ca and enter to win fantastic prizes that will enhance your Glama experience with the Glama 2016 Sweepstakes.

To complete the year, Meaford Hall is pleased to present three very special evenings in celebration of their 10th Anniversary. Straight from Ireland, The Celtic Tenors kick the party off on Dec 1, followed by a sassy Burlesque evening on Dec 2 featuring Lucky Minx and her bevy of tassle-swinging talent. Finishing the party with a bang Dec 3 is Rockin’ The Hall with Chris Scerri, Tyler Yarema, Drew Wright and more! This is a party not-to-be-missed!

With so many reasons to visit, make Meaford Hall Arts & Cultural Centre a must on your “experience” list for South Georgian Bay, and don’t forget to bring your friends and family and create memories at Southern Georgian Bay’s Premier Arts & Culture destination. 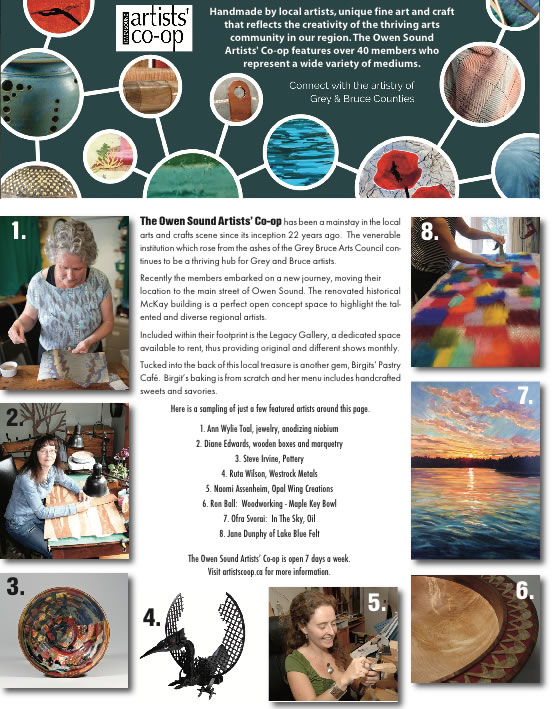