Since making its Olympic debut at the 2010 Olympic Winter Games in Vancouver, Canadians have accumulated more Olympic and World Cup medals in Ski cross than any other nation.

The Audi FIS Ski Cross World Cup, supported by Mackenzie Investments and produced by Wintersports Events Group (WSEG) is returning to Blue Mountain Resort January 23 – 26, 2019. Since making its Olympic debut as the 2010 Olympic Winter Games in Vancouver, Canadians have accumulated more Olympic and World Cup medals than any other nation. A powerhouse nation, Canadians were awarded three of the six Ski Cross medals the 2018 PyeongChang Olympics, with Brady Leman win- ning men’s gold, and Kelsey Serwa and Brittany Phelan taking women’s gold and silver respectively. In fact, Canadian women have asserted dominance, winning gold at all three Olympic Games in which Ski Cross has been a sport. 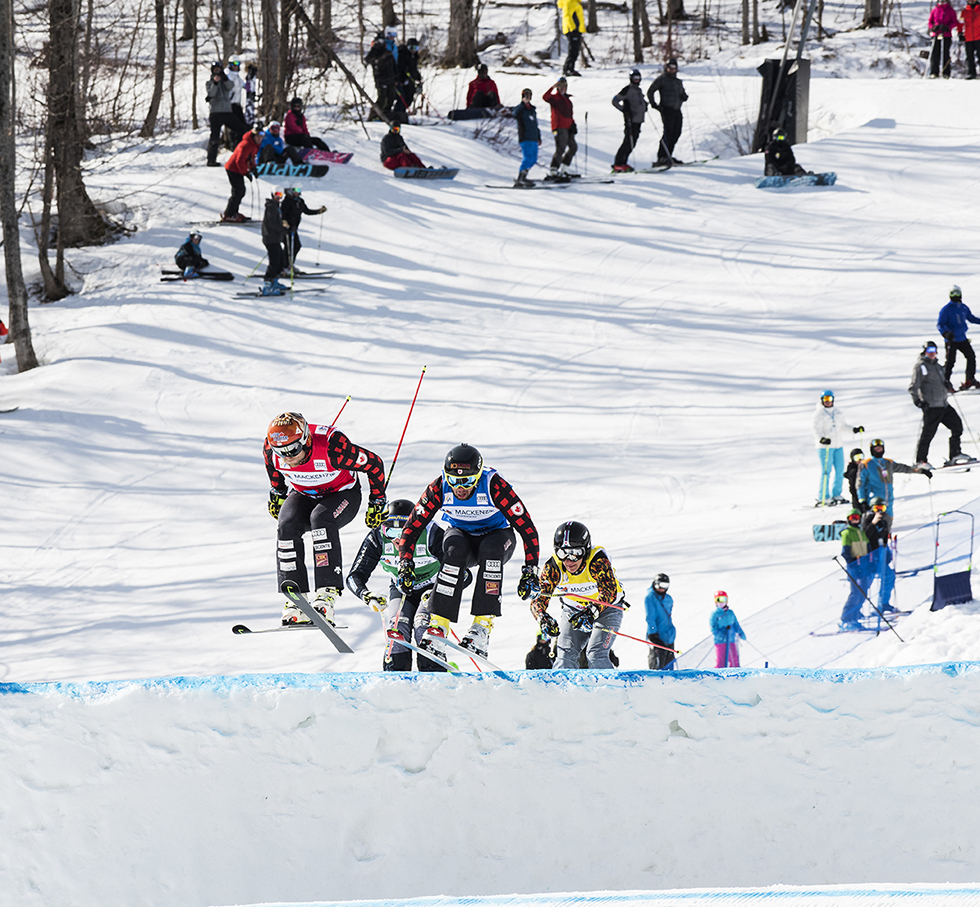 “It is significant that Canada hosts a World Cup to showcase the Canadian team, which historically has been the strongest team in the world,” explains Chris Robinson, President of WSEG. “The Es- carpment region happens to be particularly supportive of ski cross, as is Blue Mountain Resort. Being in close proximity to Toronto, and with such a ski racing culture among the Escarpment, our event is actually one of the favourite events of the teams and the athletes because we get such strong support.”

The World Cup at Blue Mountain lands in the middle of the World Cup race season and is the final opportunity for athletes to qualify for the FIS Freestyle World Championship the following week at Solitude, Utah. In all, 25 nations and more than 100 athletes are expected to attend the Audi FIS Ski Cross World Cup at Blue Mountain, including reigning Olympic champions, Canadians Kelsey Serwa and Brady Leman, as well as Ontario grown Kevin Drury. 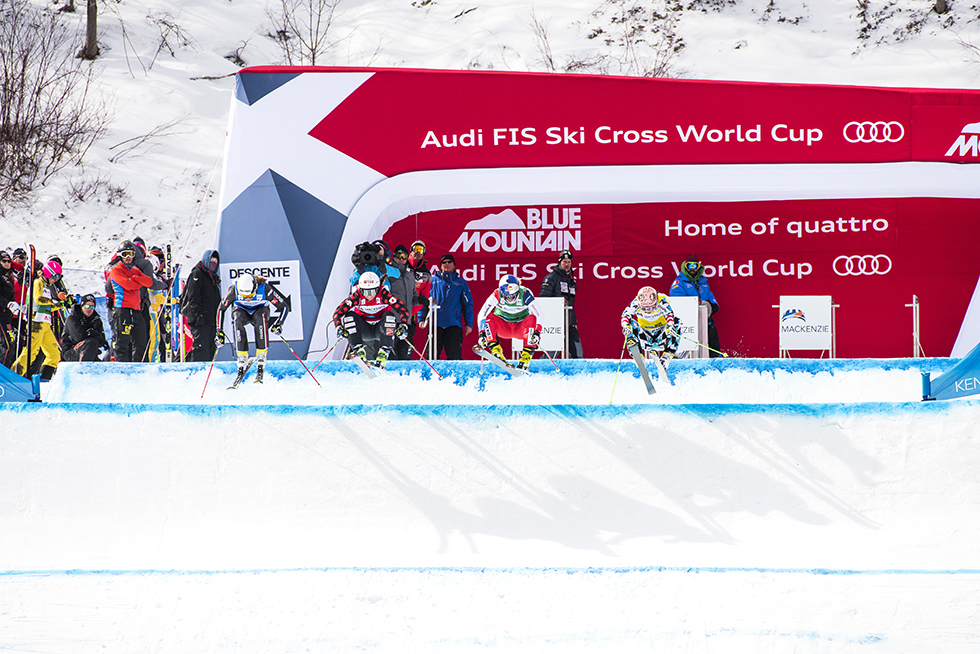 Legendary Whistler based course designer Jeff Ihaksi of White Industries brings years of expertise to Blue Mountain. Ski Cross courses have both naturally occurring terrain and artificial features in- cluding jumps, rollers and high-banked turns. The unique combination of technically challenging ter- rain and head to head racing makes Ski Cross a thrilling spectator sport. Jeff’s team of veteran ski cross course builders are world renowned, having designed and built countless World Cup and Olympic courses. The 2019 course starts at the top of the Century Express. A series of bumps and jumps and banked turns leads racers down Apple Bowl. The course then traverses the hill, finishing just above the Blue Mountain Inn. The jewel of the build is undoubtedly the Audi jump, a huge step- down which takes competitors over a glass encased Audi vehicle just before the finish line. 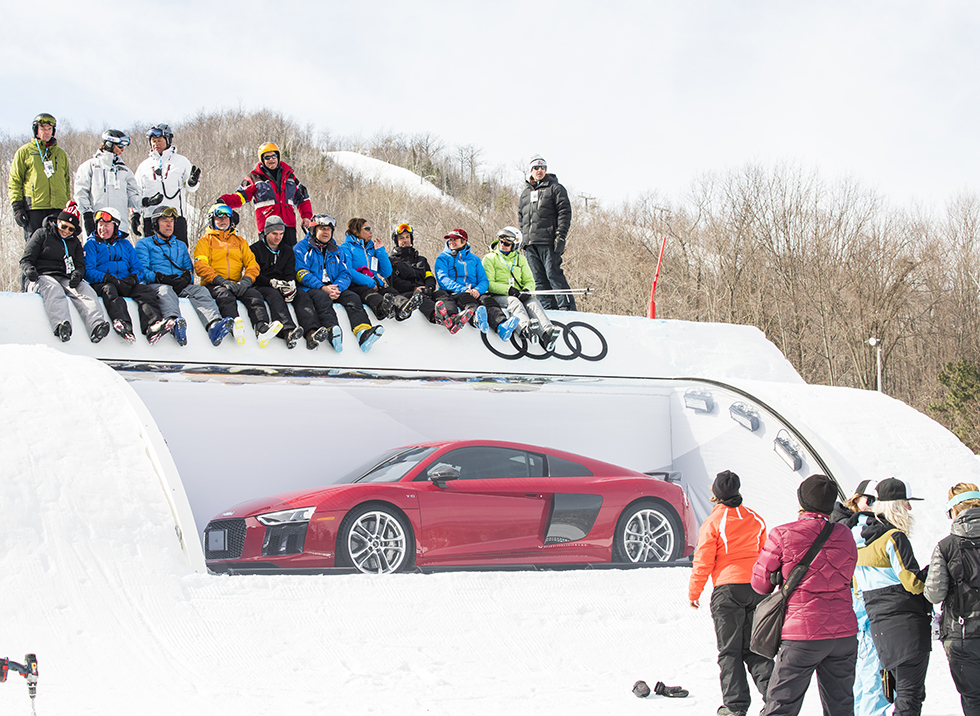 “The success of this event is due to the support from over 150 volunteers, many local businesses and, of course, our host resort, Blue Mountain,” explains Chris. “I’d like to acknowledge the dedi- cation of the Craigleith Coyotes, who are renowned for their expertise and race crew event support. They made a major commitment to the World Cup this year and we are really thankful. It means we’ll have some of the best course crew and event workers in the country out there making our event happen.”

Beginning with a timed single skier qualification on Friday, January 25 , this preliminary round seeds skiers into the knock-out heats on Saturday. Each heat consists of four racers going head to head with the aim of finishing first. The top two in each heat advance to the next round until just four skiers re- main. The final heat is a single run where four skiers race to be the first across the finish line for the win.

The Audi FIS Ski Cross World Cup is free to the public, with plenty of viewing space in front of the Blue Mountain Inn and Conference Centre. “There will be a Jumbotron adjacent to the finish line so spectators will be able to watch the race from top to bottom,” explains Chris. “We’re expecting as many as 5000 spectators and we have a fantastic live show planned, led by commentating team Brian Stemmle and Kelly Vanderbeek. They al- ways deliver a great call and provide insight into the sport. We will also have an additional screen in Blue Mountain Village where people can watch by the fire and take in the race right in the village.” The event will be televised on CBC the day of the finals, January 26, at 3pm EST. 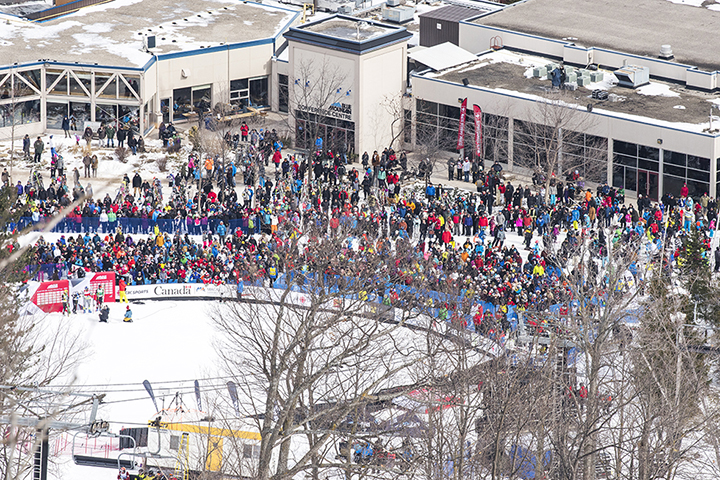 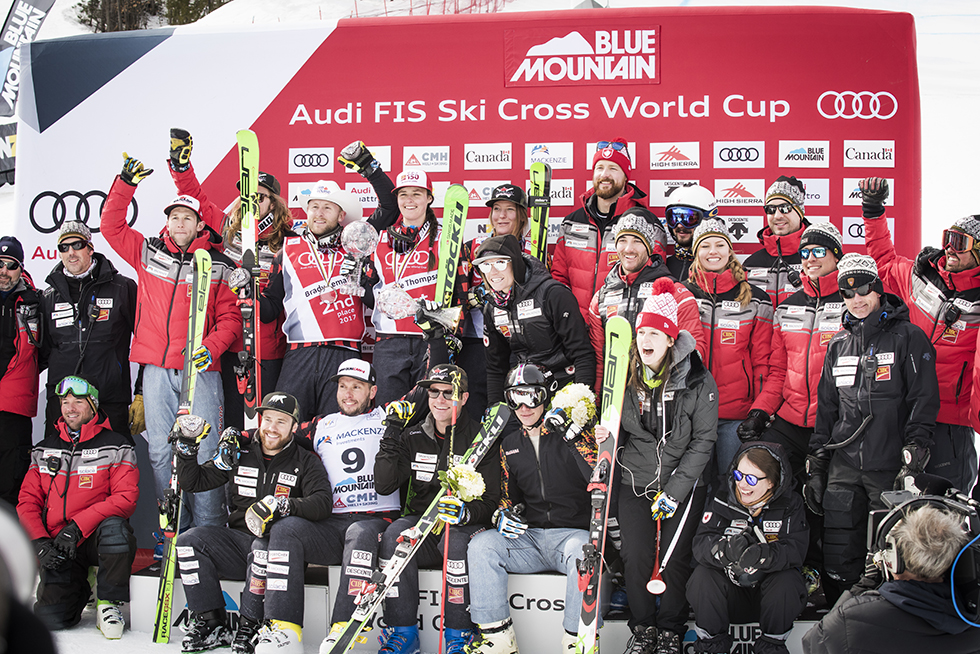 “Hosting an elite, international event such as the World Cup, allows us to engage with and provide community support, while leaving a lasting legacy from the event,” notes Chris. “Join us for a World Cup celebration throughout the weekend at Blue Mountain with live entertainment, opening cere- monies, high flying action and activities for every- one to enjoy.”

For a full schedule of events go to bluemountainworldcup.ca and get out and enjoy everything the World Cup has to offer—including live music and thrilling race action. Bring your Canadian flags, cowbells and horns and cheer Team Canada!