The reason birds can fly and we can’t is simply because they have perfect faith, for to have faith is to have wings. ~J.M. Barrie

Words and photos by Jessica Crandlemire

Somewhat by accident, I stumbled into the Collingwood Circus Club. My boys had become passionate about their pursuit of neck-risking antics and I was taking them to the parkour drop-in at the Head Over Heels Gymnastics Club on a Friday evening. While sitting in the designated viewing space, itching to get moving, I became entranced by what was happening in the far corner of the gym—a group of students was climbing nimbly up the ribbons of ceiling-high colourful fabric and performing what was akin to dancing in the air. Grace is not something that comes naturally to me so there was some doubt—but climbing, now that speaks to my heart.

I was admittedly timid in approaching the students, then upon learning that they would do staff parties I knew I had my in. It was easy to convince the crew at Maximum Physiotherapy (where I was working at the time) that this was the best way to spend our Christmas party and from then on, it was love.

For the purposes of this article, Kristin Nunes, Tara Leslie, Simon Helm, and I gather around coffee (and bananas) in Tara and Simon’s kitchen to talk about the way their circus community has formed over the last few years. There is laughing, over-talking, teasing, commiserating, and love – there is a family here. Kristin begins (appropriately) with the beginning. She initially found silks in Mexico in 2009 while on vacation with her mom. She ran into some artists performing on the beach. A gymnastics coach herself, she was able to match their skill. She came home, promptly bought a silk and started to train in earnest. She connected with Terry Warren, owner of Head Over Heels Gymnastics and soon after, Kristin opened Collingwood Circus Club. A former paramedic, Kristin had always assumed she would go back to that, but the club took off. Tara Leslie and Jayden Walker were Kristin’s first students, for a while it was just the two of them but then it snowballed.

Tara was a gymnastics coach as well but was quickly pulled into her role as coach for the Circus Club. Kristin (being pregnant at the time with her first child) was having to demonstrate the moves on a Barbie doll and bits of fabric. She laughs remembering trying to wrap her belly in the silk to demonstrate from the mat. As you can imagine it was a bit limiting, so Tara became more and more integral to the club, as she was pulled away from the gymnastics side to demonstrate for and help the circus students. Tara found her passion for the art was immediate and there was no longer any question where she wanted to be. Tara loved the versatility of the silk. “If someone really hates one move, there are other moves they can try. If someone is really strong but not flexible we can mold the routine to suit them. If someone is really flexible but not strong there are ways to support that too. You can do what you love.”

The team’s aspirations grew quickly. There was inspiration to be found online with youtube videos and on Instagram. As they built their skill set they were able to get more and more creative and develop their own routines. The addition of Martina Speirs brought hoop performing into the mix. In addition, they have trapeze and pole.

Silks is an art form and like any creative process it is constantly changing and growing. The artists are taking the movements and making them personal. The group performs in all kinds of varied capacities, and their skill set is equally varied. The team do a lot of corporate functions, weddings, and stage performances. One of their favourite roles is bartending. There are a lot of performers who bartend on hoops, but not many who pour drinks hanging from the silks. It’s exciting to watch, but also a lot of fun for the performers. 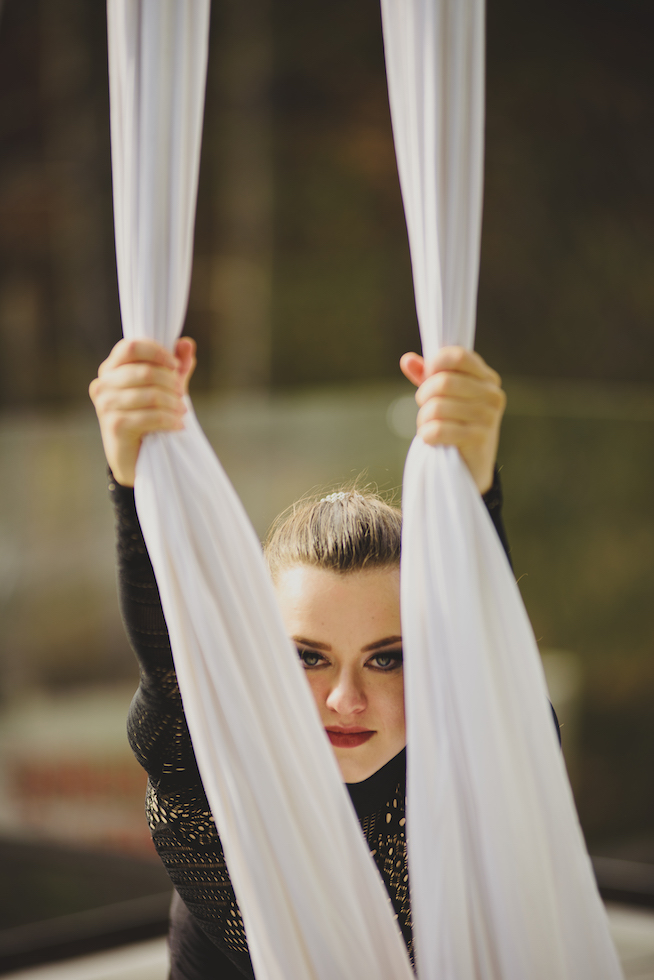 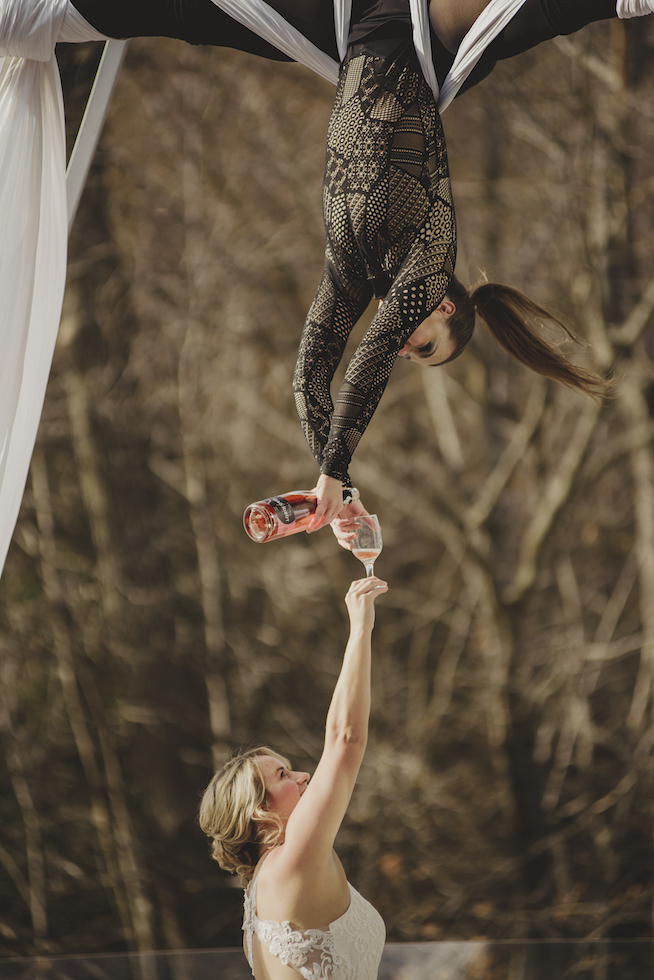 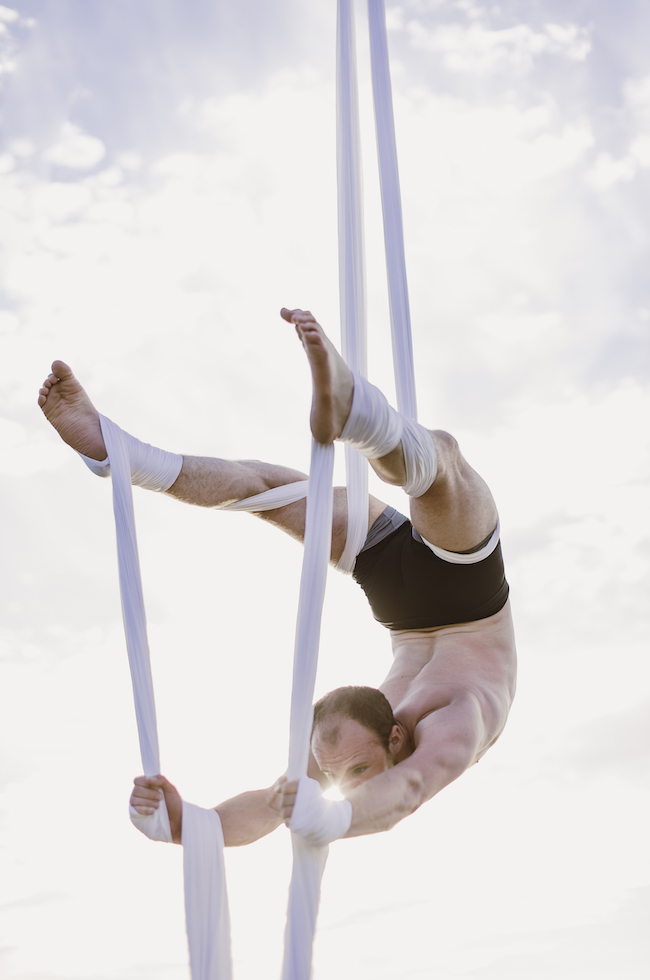 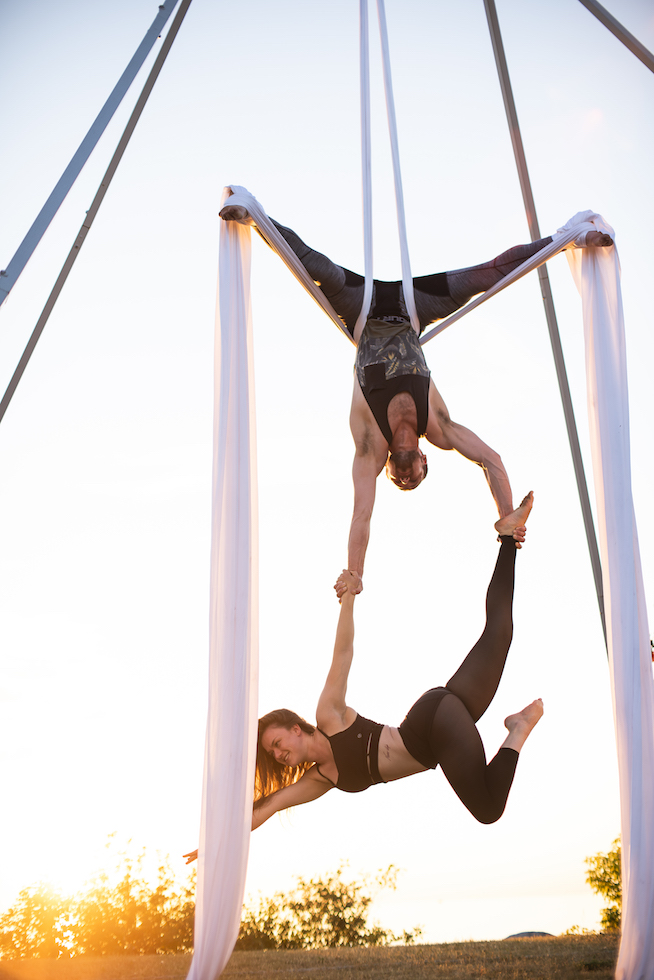 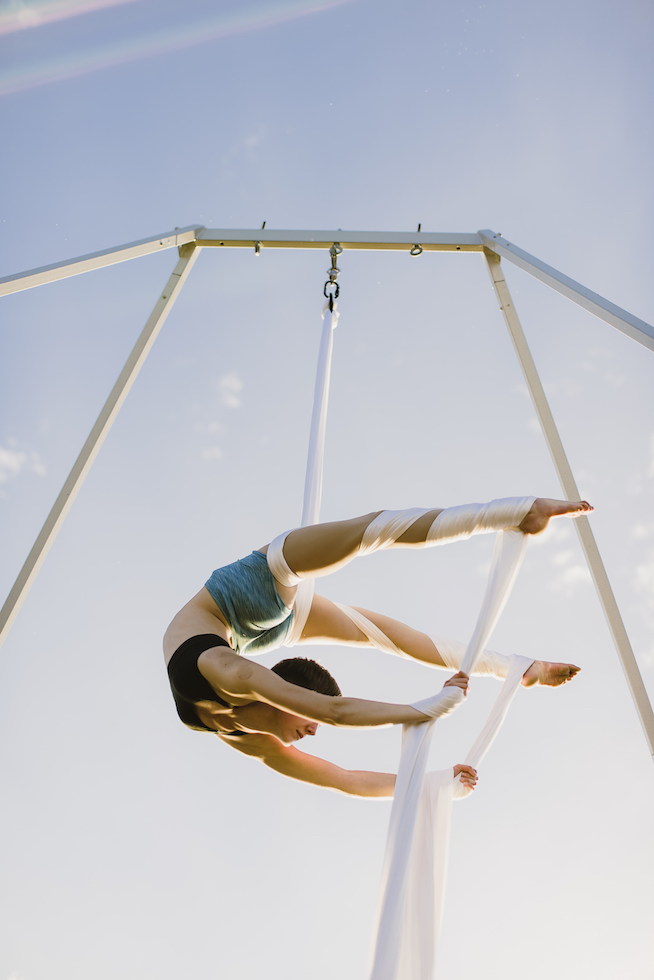 The coaches enjoy working with all ages—the range from children of five or six to men and women reaching into their sixties is inspiring. Kristin says she knew it was something she could give people. Where gymnastics has rigorous demands that not all bodies have the capability for, the silks make it possible for even the most awkward of us (yes this is me) to know what it feels like to fly. She loves that she can be a part of the process to empower others and give them that sense of accomplishment. The demand has grown so much that in association with the Spalding School of the Arts, they have now opened a second location in Barrie.

Simon came onto the scene about two years ago. He had been friends with Tara since high school and had come to a performance of hers. He was amazed by what he saw, but still too intimidated to try it himself. As Simon pulls up his first instagram post, he reports that June 2nd, 2015 was one of his first classes. They laugh as they remember how the events coincided with each of Kristin’s pregnancies and the familial element of their relationship is obvious. Simon’s learning curve was extreme. He was not a gymnast before, and to watch him now you can hardly believe it. Simon explains it became something that was his, something that gave him more confidence and a sense of belonging.

They willingly opened up. In Simon’s own words, “I’ve spent so much time worrying about other peoples’ perceptions of me that sometimes I lose myself. I conditioned myself into thinking that I had to change to be accepted and I wanted to be liked by everyone. I found freedom in silks that I hadn’t had before. I can be expressive, dramatic, flamboyant and graceful. I felt I could be unapologetically me.”

Historically, the circus has been a safe haven for those who have felt themselves misfits, those whose talents are beyond what the mainstream had to offer. 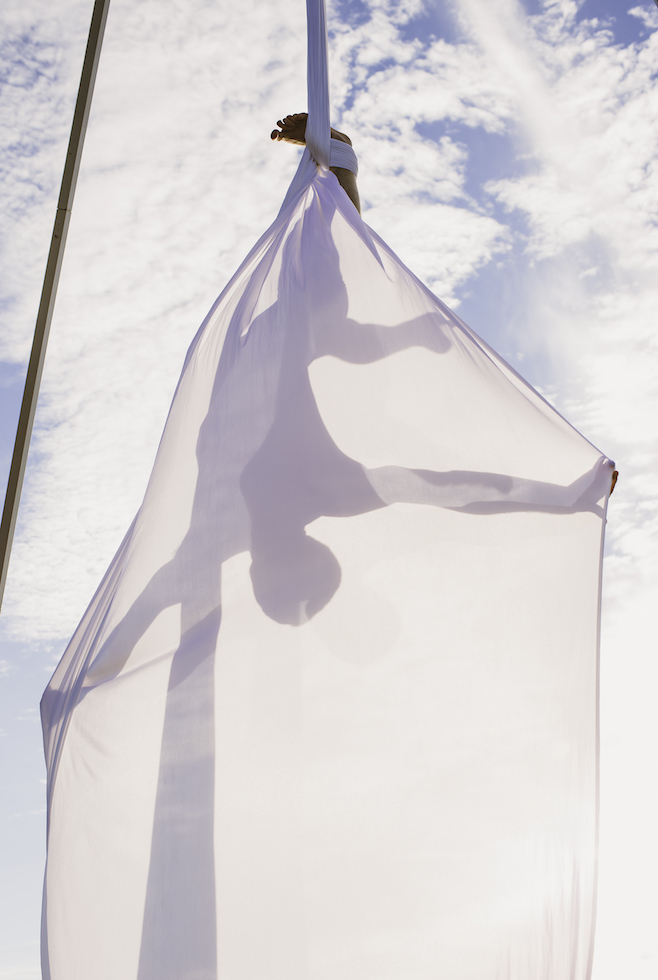 It strikes me as rather poetic that while the club does call the gymnasts and the dancers and the performers, it also calls the athlete who feels isolated by the stereotypical idea of sport, the child (or adult!) who is searching for a place to belong. As Tara points out, it’s a safe space to be free and different and eclectic while feeling safe and supported.

I’m suddenly overcome with how beautiful this is, how the enduring need for belonging has found a haven in this crew. Individuality is not just accepted it’s celebrated. |E|