And change screws with people, no two ways about it.  In this market, as real estate professionals, we have had two major problems dealing with this change.  One is tangible and the other is a bit harder to nail down, and therefore to deal with.

The tangible issue is one of financing. When the market was smoking hot a few months ago, multiple offers were the order of the day. The frenzy we saw tied home buyer’s hands somewhat with their ability to add conditions to offers and still get the house they were bidding on.  One of the most regular conditions we see in our area, and one that is hard to negotiate around is financing. This can, by extension, mean the sale of a purchaser’s home. A number of months ago, the market was such that with savvy marketing and a bit of time, you could sell your house in almost any market in Ontario for a relatively predictable price and move along.

However, this changed, and it changed quite quickly. People who had purchased a home, expecting the sale of their existing home to be quick and easy were in for a nasty shock.  Fast forward a few months, to the quickly approaching closing, and their original house still isn’t sold. They can’t close on their new purchase as they don’t have the funds from the other sale. Thankfully, we haven’t seen this too terribly often. The bank of mom and dad, delayed closings and bridge financing have all come to the rescue. Only a few of our deals have run into catastrophic problems.

The less tangible issue we have is that of consumer expectations. Imagine if all the news you had heard was about multiple offers and soaring prices.  Not that hard to imagine in recent history right? As a seller, you go into the transaction thinking you are in position “A”, and are surprised as hell when you find out your house not only isn’t selling in a day at 10% over asking, but that you might actually have to consider a price reduction because the market just isn’t what it was.

We talk a lot about stuff like this in our weekly sales meetings. Recently, during such a meeting, some of our folks were asking the group for strategies and suggestions on how to educate a client about the changing market. They needed the benefit of someone else’s experience.  And boy did they get it!

We have a gentleman in our office who retired from selling real estate about 4 years ago.  While he hasn’t been a REALTOR® in that time, he still occupies an office that opens on to our bullpen and communal area. He is a guy that has forgotten more about commercial real estate than most of the rest of us know. He rarely talks.  He is more of a listener. And that is why he still has an office even though he isn’t selling.  He is a sounding board for our team. The very voice of experience. And as everyone was talking and sharing, he piped up with one of the most salient arguments I have ever taken in on the subject.

He said “Guys…you have to tell your clients that there is only one market in which they can sell. And that is today’s market. They can lament yesterday’s market, and they can look forward to tomorrow’s but the only market they can sell in is today’s. It doesn’t matter what happened last month. That will show you trends, but you can’t go back there”.

Right…market price…willing buyer, willing seller, free of duress and adequate exposure to the market. Yesterday’s market is relevant of course, but it is not today’s. One of our prime jobs as real estate professionals is to provide that current market expertise. To help set our client’s expectations and to help them navigate this ever-changing market. *

And this is even more important now than it was a few months ago.  A few months ago, we were following trends of our feeder markets.  Historically low inventory, multiple offers etc.  However, as that has changed profoundly in some other markets like the GTA at the time of writing, our trends are diverging.

As you will see below, the market has slowed down somewhat, with lower MLS unit sales and dollar volume sales that are not increasing the way they were earlier in the year. However, as we have seen inventory numbers soar in some Southern Ontario markets, ours remain low.  Could it be that despite a weakening southern market, the strong demographic shift that we have seen and forecasted in our area will shore us up against large potential shifts?

Noted Canadian economist, author and demographer David Foot said “Real estate is affected far more by demographics than it is by economics.” Nowhere is that more appropriate than in our area I think. We shall see.

The unseasonably cool weather we experienced this summer spilled over into many of the real estate markets across Canada including the southern Georgian Bay regions. August marked the second month in a row we have seen a significant drop in MLS® sales activity across southern Georgian Bay reflecting the same slowdown that has impacted the market in the Greater Toronto Area and elsewhere. The questions that remains:  Is this pause in real estate sales temporary or are we in a prolonged downturn?

As we have stated previously, one the factors impacting sales in our area is the lack of available properties listed for sale. Unlike in other markets where recent months have seen the number of MLS® listings coming to market ramping up as sellers look to take advantage of strong market conditions, we have not experienced the same phenomena here in our local market.  New MLS® listings through the end of August are down 12% from the same time last year.  As the saying goes, “…you can’t sell from an empty wagon.”  *

Despite the reduced number of MLS® sales year-to-date, MLS® dollar volume has to this point remained ahead of 2016 fuelled by strong sales activity for homes priced upwards of $1 million and higher.  Year-to-date MLS® dollars sales for the area totals $796.3 million.  This is an increase of 11% from one year ago despite the fact that MLS® unit sales are down 10%.  In reviewing sales in various price ranges, we clearly see that MLS® dollar volume is being driven by an exceptionally strong demand for higher end properties.  The sale of properties priced between $500,000 and $999,999 are up 37% year-to-date with 417 sales this year compared to 304 last year.  More significantly, sales over $1 million are more than double those of last year with 91 sales reported through the end of August compared to 44 sales in this price range last year.

Overall, MLS® single family home sales total 1,091 properties to the end of August, down 192 units or almost 18% from last year.  MLS® condominium sales of 352 units reflects a 6% decrease from one year ago.  Conversely, we have seen a very strong demand for vacant land sales in 2017, year-to-date there have been 250 MLS® sales of vacant lots and acreages compared to just 169 last year, an increase of 48%.

In 2016, MLS® dollar volume in our market exceeded $1 billion dollars which was the first time ever for us to exceed this level of sales  Through most of this year we seemed destined to reach the same dollar threshold of sales as in 2016 but following the back-to-back decreases in July and August nothing is certain.  As we head into the final four months of 2017, a 25% reduction in total sales from September to December will result in us falling short of $1 billion in sales for the year. Given the weak results we have seen over the past two months, we could even fall short of the record sales achieved in 2016. |E| 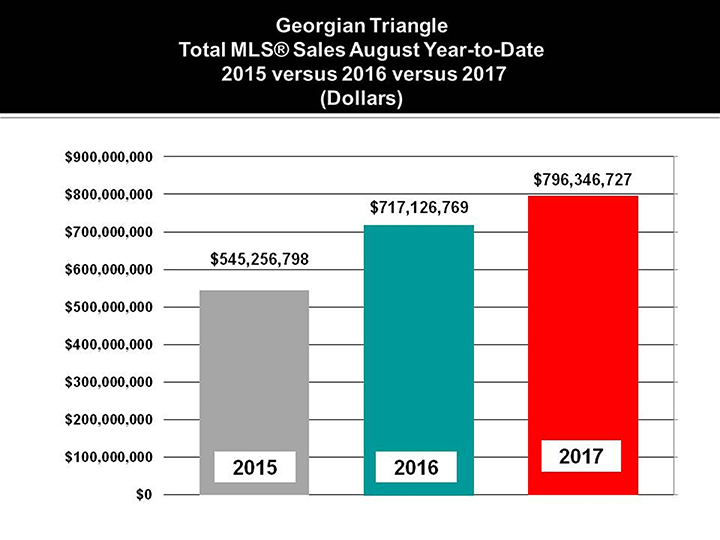 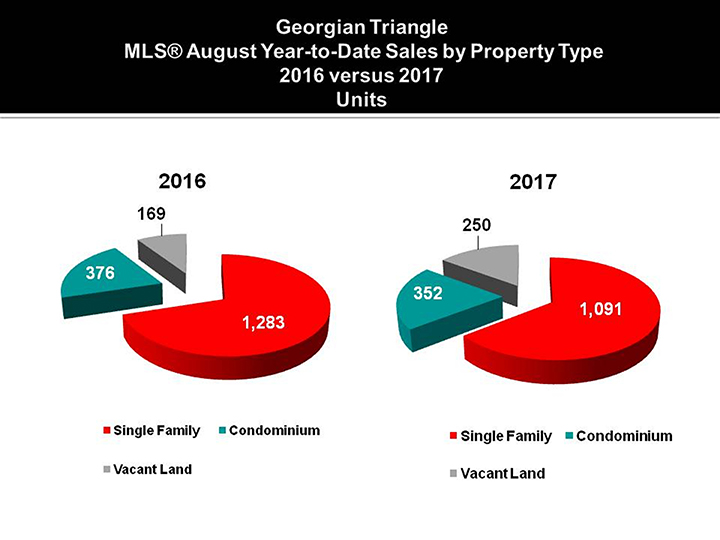 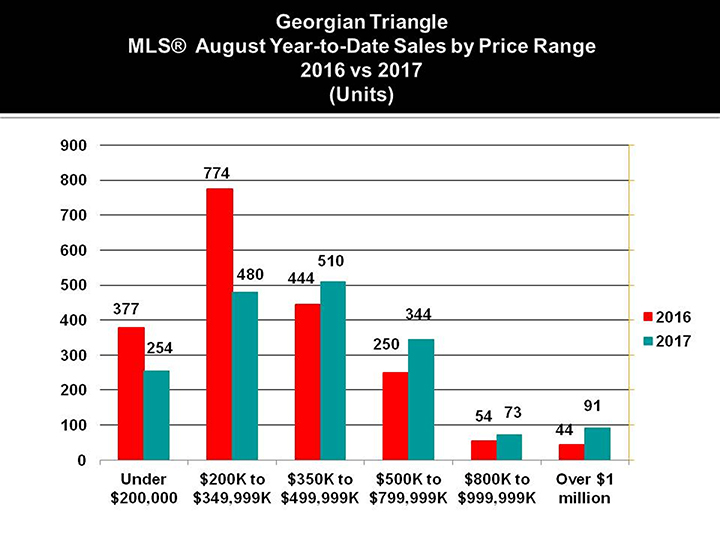 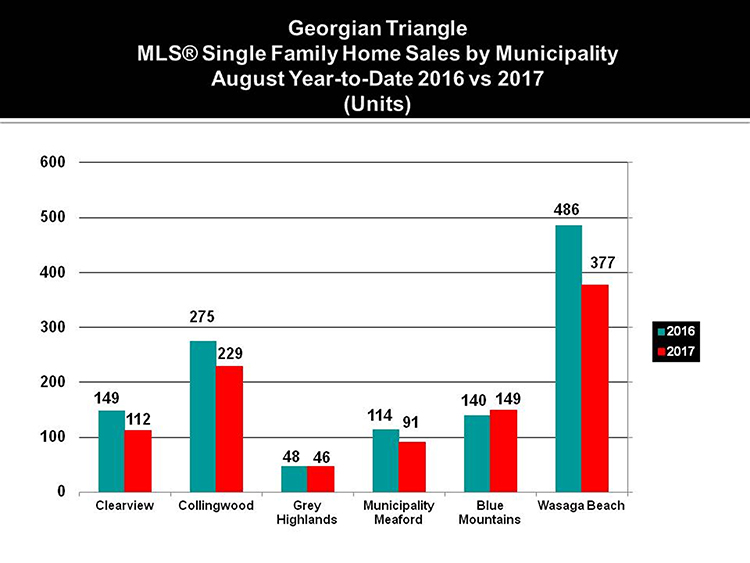 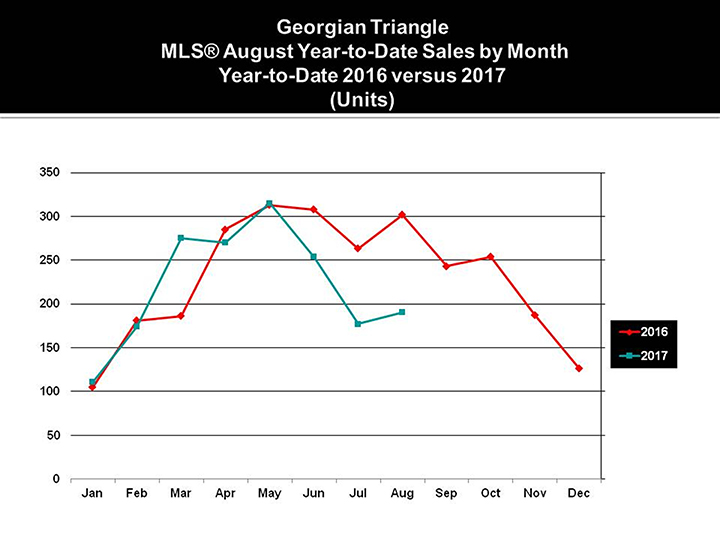 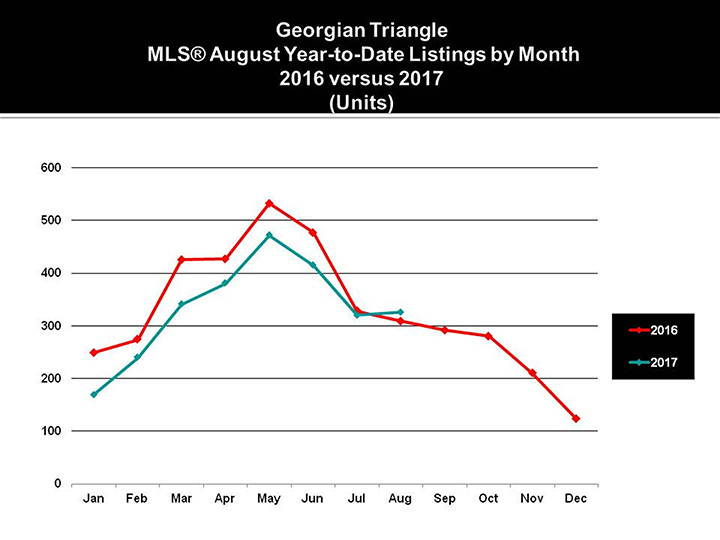 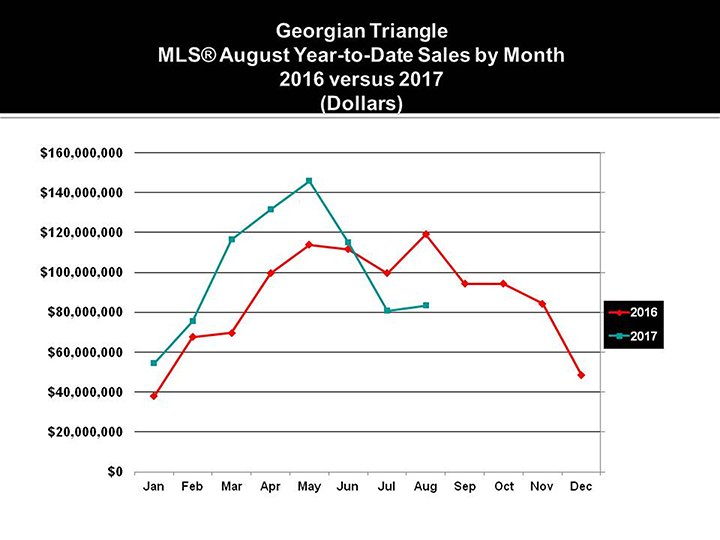