Blue Mountain Village Association’s award winning Apple Pie Trail is a culinary road trip to all things apple. As you explore the country roads between Collingwood and Meaford you’ll discover homemade signature pies made with a variety of apples and crust styles, artisan ciders, apple wine, cheesecake, honey and bread and of course, fresh apples. But wait there’s more! While touring and tasting you can visit the breweries, farmer’s markets, spas, wineries and restaurants that feature local apples on their menus as well as art galleries and museums with apple-themed exhibits.  Combined with the stunning fall foliage colours of the region the trail becomes a sensory wonderland of sights, tastes and smells.

There’s so many locales and events that a road map is imperative and The Apple Pie Trail website provides comprehensive information and a map to help you design your own apple tour. Whether you choose self-guided, guided, adventure, culinary experiences or just sight-seeing applepietrail.com is the perfect resource for planning your excursion. There are year-round apple festivities to enjoy and the website provides information about them too.

The Blue Mountains is Ontario’s apple capital because of the unique micro-climate in the area. They’re located at the crossroads of the escarpment, the Beaver Valley and Georgian Bay. Combine location, warmer winters and less windy summers and you have three features that set the stage for spectacular apple production that has become a showcase for the world of culinary tourism. The local economy has also benefitted with innovative products and home-grown food now available for the table. 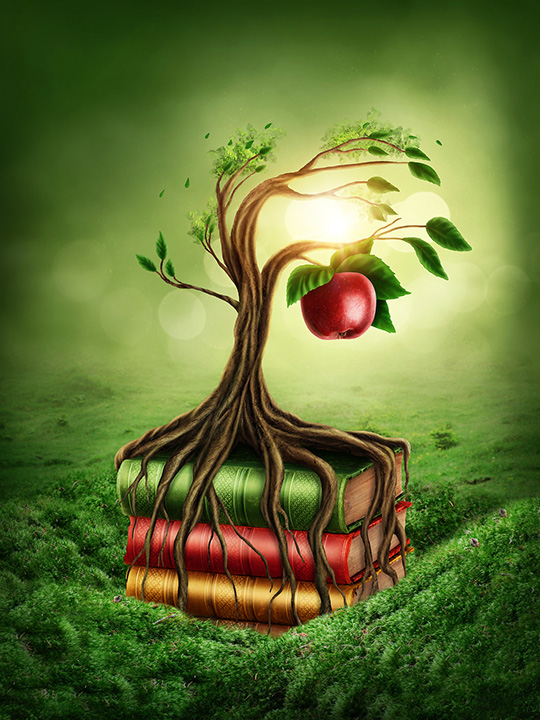 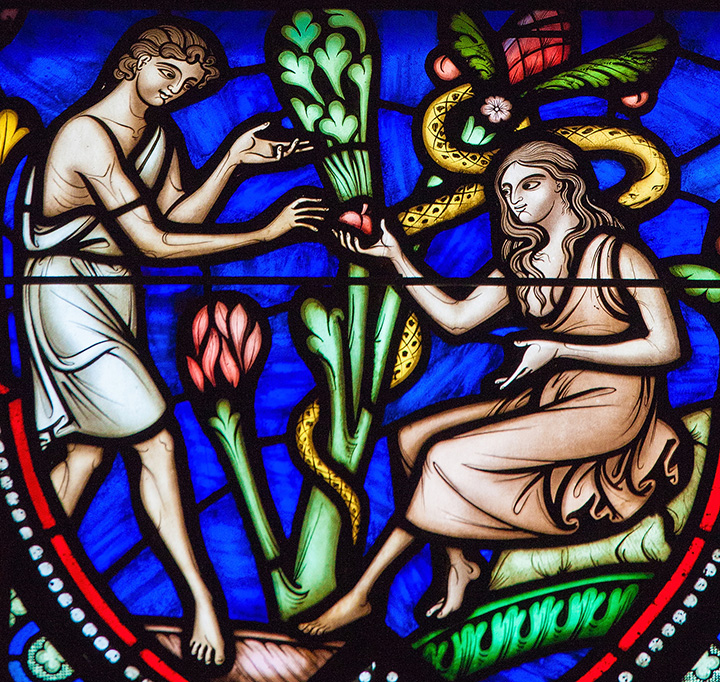 If you follow the trail of Apple symbolism you’ll end up in the distant past when folklore deemed it as the power fruit of enchantment and divination. The apple is magical. For centuries it was thought to attract love, peace, health, wholeness, trust, beauty, fertility, wisdom, perfection and because it lasted for a long time – longevity. It was associated with enchantment and it was believed to open the doors to the underworld and the realm of the Gods. Even today this fruit and its beautiful blossoms are highly regarded and used to attract good fortune.

The Druids regarded the apple tree as charmed because of its ability to transform. They marveled at the awe-inspiring blossoms that changed into an equally magnificent fruit which also had the power of longevity since it remained fresh when stored. The Druids believed that eating an apple could be trippy and transport them to a paradisal nether-world. Then through fermentation and pressing it became hard cider which when drunk transformed the drinker!

Apples appear in many world legends. They have long been associated with immortality, wisdom and knowledge as exemplified by its role in the temptation of Adam and Eve in the Garden of Eden. The mystical Isle of Avalon, famed place of eternal rest for Celtic heroes including King Arthur, is known as “the apple land” or “apple island.” In Scandinavian legends, the North-European gods and goddesses were fed an apple every evening by Iduna, the goddess of spring and youth who nurtures an apple orchard in Asgard.

The Chinese five elemental symbolist system regards all plant life as a stimulus for new projects and adventures. In specific the energy of apple blossoms bursting forth in spring is believed to foster encouragement to take on new challenges and renew strength and resolve. Because of its warm pinks and reds, the blossom and fruit are associated with the fire element in Asia which in turn represents idealist endeavors, warmth and enthusiasm.

I recently saw a photograph that confirms that this ageless symbolism is still used in China today but for a surprising reason. The photo was of influential politicians seated in a meeting room. They were attending a high level international economic summit. Instead of the expected backdrop of dark paneling, heavy curtains, plain beige wall, corporate logos, country flags, mottos or crests there was a photograph of apple blossoms that stretched over the entire surface of the wall behind the participants. The members, who were there to make policy and deals, were seated at a U-shaped table with the head of the committee placed directly behind the photograph. That meant every time the members looked to him they would see the apple blossoms behind him.

“Smart” I thought, because the apple blossom represents action, movement, courage and passion. I can imagine the discussions were “fruitful” for the hosts of the meeting because they used a heritage symbol of encouragement and hope as a subliminal tactic to their advantage.

The use of apples and cinnamon as an influential scent in home sales is well known. We’ve all experienced the pleasurable sensations of comfort, relaxation and culinary nostalgia when the aroma of warm apple pie or cider fills the air. It reminds us of childhood, safety and trust, it warms our hearts and perhaps melts our resistance to opening our wallets.

I wonder what would happen if business people placed apple blossoms and apples in the rooms where negotiations take place. Would people be more inclined to buy, trust or remain open minded if apples were present? Could that idea also be useful in board rooms, think tanks and therapeutic environments? Furthermore, does that innocent looking bowl of apples posed as the finishing touch to the room staged for a realtor’s open house have a secret concealed agenda? Do we have an unconscious response to the sight of the fruit that conjures up goodness, wholesomeness, trust and positive feelings? The rule of thumb in contemporary home staging is to use green apples because they connote freshness, but perhaps other magical powers are in play.

In many cultures Apple is also known as the Fruit of the Gods and Fruit of the Underworld and these two associations may explain apple’s longtime connection with magic. If the apple had the power of the upper and lower realms that meant it was a conduit to and from them and it was believed that those worlds held the secrets of the future and life’s mysteries. This may explain the numerous old school divination techniques based on the apple. The seeds and peels predicted the future while the fruit and blossoms were used to attract good fortune.

Of course, everyone knows when you hold the stem with your thumb and forefinger and then, with each twist count off the alphabet until it finally breaks then the letter you’re at, will be the first initial of your true love. And, there are many more intriguing, apple folk lore applications and prediction techniques. 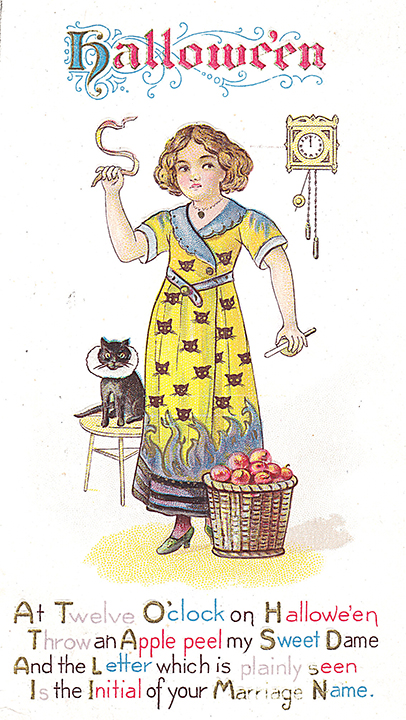 Halloween is often chosen as divination time because it was believed to be the point in the year when the veil between this world and the next is very thin so the contact between the here and the hereafter was easily attained. The entities that inhabited the spirit realm were thought to be privy to hidden knowledge and apple divination was a way to gain access to what the future held and secret information.

The Halloween activity of apple bobbing or dooking began in Scotland. To dook means to dip something into something.  ‘Dook’ then evolved into ‘dunk’ (as in dunking a doughnut into coffee.) For this fortune to work you need to peel the skin from an apple that you retrieved while participating in the dooking. Taking care to keep the peel intact then throw it over your shoulder and as it falls to the ground it will form the initial of a new love interest.

Past folk-lore beliefs endowed the apple with the powers of divination and the attraction of luck. Today it inspires culinarians, delights eaters, communicates symbolic subliminal messages, brings fortune to growers and provides the Blue Mountain region with a tourist cache that is year-round. There are so many regional orchards you’d think the entire area would be magical, and it is. |E|